Life on an Aircraft Carrier 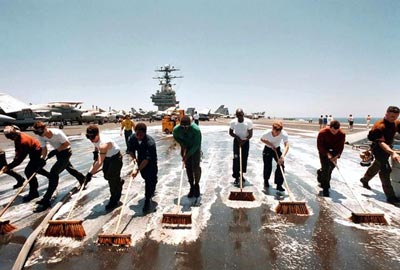 The modern supercarrier is widely referred to as a "city at sea." With between 5,000 and 6,000 people working, relaxing, eating and sleeping onboard for months at a time, this is certainly accurate. But it's not at all like any city you would find on dry land.

For starters, most residents have little opportunity to see the outside world. The flight deck, hangar and fantail all have wonderful views of the sea and sky, but they are so hectic and dangerous that only a handful of people are allowed access during normal operations. The top levels of the island are safe enough, but sensitive operations and limited space means you can't have a lot of people coming and going. A sailor who works below deck might go for weeks without ever seeing daylight.

Throughout the ship, conditions are much more cramped than in a normal city. To get from place to place, personnel have to scale nearly vertical steps and squeeze past each other in narrow corridors. The berthing compartments (sleeping quarters) are extremely tight. Enlisted personnel share a compartment with about 60 other people, all sleeping in single bunks, generally called racks, crammed together in stacks of three. Each person gets a small stowage bin and upright locker for clothes and personal belongings, and everybody in the compartment shares a bathroom and a small common area with a television hooked up to one of the carrier's satellite dishes. Officers enjoy more space and finer furnishings, but their space is limited, too. Everybody onboard has to get used to tight quarters.

Jobs are highly varied, just like in a normal city. Approximately 2,500 men and women form the air wing, the people who actually fly and maintain the aircraft. Another 3,000 or so people make up the ship's company, which keeps all parts of the carrier running smoothly -- this includes everything from washing dishes and preparing meals to handling weaponry and maintaining the nuclear reactors.

The ship has everything its residents need to live, even if it's not as comfortably as they would like. There are multiple galleys (kitchens) and mess halls onboard, which collectively serve as many as 18,000 meals a day. The ship also has a sizable laundry facility, dentist and doctor's offices, various stores and a bank of telephones where personnel can talk to their families via satellite.

Life onboard an aircraft carrier is undeniably difficult and exhausting, but it can also be exhilarating, especially for the men and women up on the flight deck, flying and bringing in planes on a tiny patch of runway. Good or bad, it's like no other place on earth.

For more information about aircraft carriers, check out the links below.