Taking Off from an Aircraft Carrier 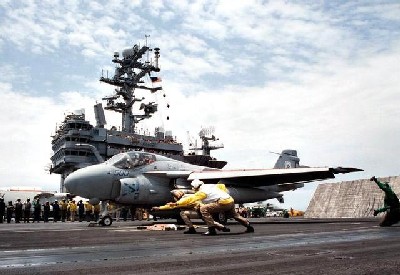 An aircraft carrier flight deck is one of the most exhilarating and dangerous work environments in the world (not to mention one of the loudest). The deck may look like an ordinary land runway, but it works very differently, due to its smaller size. When the crew is in full swing, planes are landing and taking off at a furious rate in a limited space. One careless moment, and a fighter jet engine could suck somebody in or blast somebody off the edge of the deck into the ocean.

But as dangerous as the flight deck is for the deck crew, they have it pretty easy compared to the pilots. The flight deck isn't nearly long enough for most military planes to make ordinary landings or takeoffs, so they have to head out and come in with some extraordinary machine assistance.

If you've read How Airplanes Work, you know that an airplane has to get a lot of air moving over its wings to generate lift. To make takeoff a little easier, carriers can get additional airflow over the flight deck by speeding through the ocean, into the wind, in the direction of takeoff. This air moving over the wings lowers the plane's minimum takeoff speed.

Getting air moving over the deck is important, but the primary takeoff assistance comes from the carrier's four catapults, which get the planes up to high speeds in a very short distance. Each catapult consists of two pistons that sit inside two parallel cylinders, each about as long as a football field, positioned under the deck. The pistons each have a metal lug on their tip, which protrudes through a narrow gap along the top of each cylinder. The two lugs extend through rubber flanges, which seal the cylinders, and through a gap in the flight deck, where they attach to a small shuttle.

To prepare for a takeoff, the flight deck crew moves the plane into position at the rear of the catapult and attaches the towbar on the plane's nose gear (front wheels) to a slot in the shuttle. The crew positions another bar, the holdback, between the back of the wheel and the shuttle (in F-14 and F/A-18 fighter jets, the holdback is built into the nose gear; in other planes, it's a separate piece).

While all of this is going on, the flight crew raises the jet blast deflector (JBD) behind the plane (aft of the plane, in this case). When the JBD, towbar and holdback are all in position, and all the final checks have been made, the catapult officer (also known as the "shooter") gets the catapults ready from the catapult control pod, a small, encased control station with a transparent dome that protrudes above the flight deck.

When the plane is ready to go, the catapult officer opens valves to fill the catapult cylinders with high-pressure steam from the ship's reactors. This steam provides the necessary force to propel the pistons at high speed, slinging the plane forward to generate the necessary lift for takeoff. Initially, the pistons are locked into place, so the cylinders simply build up pressure. The catapult officer carefully monitors the pressure level so it's just right for the particular plane and deck conditions. If the pressure is too low, the plane won't get moving fast enough to take off, and the catapult will throw it into the ocean. If there's too much pressure, the sudden jerk could break the nose gear right off.

When the cylinders are charged to the appropriate pressure level, the pilot blasts the plane's engines. The holdback keeps the plane on the shuttle while the engines generate considerable thrust. The catapult officer releases the pistons, the force causes the holdbacks to release, and the steam pressure slams the shuttle and plane forward. At the end of the catapult, the tow bar pops out of the shuttle, releasing the plane. This totally steam-driven system can rocket a 45,000-pound plane from 0 to 165 miles per hour (a 20,000-kg plane from 0 to 266 kph) in two seconds!

If everything goes well, the speeding plane has generated enough lift to take off. If not, the pilot (or pilots) activate their ejector seats to escape before the plane goes hurdling into the ocean ahead of the ship (this hardly ever happens, but the risk is always there).

Taking off is extremely difficult, but the real trick is coming back in. In the next section, we'll take a look at the standard carrier landing, or recovery, procedure.