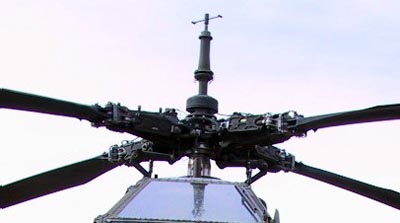 The rotor assembly on an AH-64A Apache
Photo courtesy U.S. Department of Defense

As the main rotor spins, it exerts a rotation force on the entire helicopter. The rear rotor blades work against this force -- they push the tail boom in the opposite direction. By changing the pitch of the rear blades, the pilot can rotate the helicopter in either direction or keep it from turning at all. An Apache has double tail rotors, each with two blades.

The newest Apache sports twin General Electric T700-GE-701C turboshaft engines, boasting about 1,700 horsepower each. Each engine turns a drive shaft, which is connected to a simple gear box. The gear box shifts the angle of rotation about 90 degrees and passes the power on to the transmission. The transmission transmits the power to the main rotor assembly and a long shaft leading to the tail rotor. The rotor is optimized to provide much greater agility than you find in a typical helicopter.

­The core structure of each blade consists of five stainless steel arms, called spars, which are surrounded by a fiberglass skeleton. The trailing edge of each blade is covered with a sturdy graphite composite material, while the leading edge is made of titanium. The titanium is strong enough to withstand brushes with trees and other minor obstacles, which is helpful in "nap-of-the-earth" flying (zipping along just above the contours of the ground). Apaches need to fly this way to sneak up on targets and to avoid attack. The rear tail wing helps stabilize the helicopter during nap-of-the-earth flight as well as during hovering.

You could say, based on all this information, that the Apache is just a high-end helicopter. But that would be like calling James Bond's Aston Martin just a high-end car. As we'll see in the next few sections, the Apache's advanced weaponry puts it in an entirely different class.