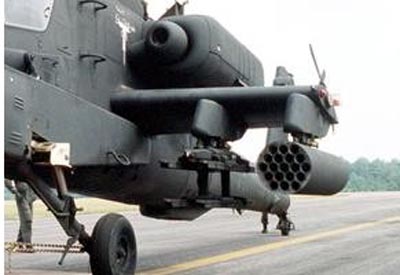 Apaches usually fly with two Hydra rocket launchers in place of two of the Hellfire missile sets. Each rocket launcher carries 19 folding-fin 2.75-inch aerial rockets, secured in launching tubes. To fire the rockets, the launcher triggers an igniter at the rear end of the tube. The Apache gunner can fire one rocket at a time or launch them in groups. The flight fins unfold to stabilize the rocket once it leaves the launcher.

The rockets work with a variety of warhead designs. For example, they might be armed with high-power explosives or just smoke-producing materials. In one configuration, the warhead delivers several submunitions, small bombs that separate from the rocket in the air and fall on targets below.

The gunner engages close-range targets with an M230 30-mm automatic cannon attached to a turret under the helicopter's nose. The gunner aims the gun using a sophisticated computer system in the cockpit. The computer controls hydraulics that swing the turret from side to side and up and down.

The automatic cannon is a chain gun design, powered by an electric motor. The motor rotates the chain, which slides the bolt assembly back and forth to load, fire, extract and eject cartridges. This is different from an ordinary machine gun, which uses the force of the cartridge explosion or flying bullet to move the bolt.

The cartridges travel from a magazine above the gun down a feed chute to the chamber. The magazine holds a maximum of 1,200 rounds, and the gun can fire 600 to 650 rounds a minute. The cannon fires high-explosive rounds designed to pierce light armor.

In the next section, we'll look at the targeting system for the cannon, as well as the other major Apache controls.

Who uses the Apache, and who makes it?

The Apache is the primary attack helicopter in the U.S. arsenal. Other countries, including the United Kingdom, Israel and Saudi Arabia, have also added Apaches to their fleet.

The first series of Apaches, developed by Hughes Helicopters in the 1970s, went into active service in 1985. The U.S. military is gradually replacing this original design, known as the AH-64A Apache, with the more advanced AH-64D Apache Longbow. In 1984, McDonnell Douglas purchased Hughes Helicopters, and in 1997, Boeing merged with McDonnell Douglas. Today, Boeing manufactures Apache helicopters, and the UK-based GKN Westland Helicopters manufacturers the English version of the Apache, the WAH-64.