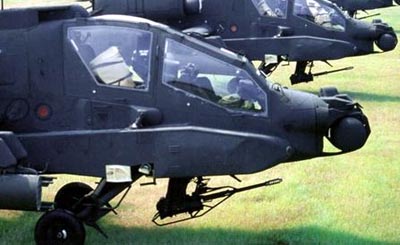 The Apache has two cockpit sections: The pilot sits in the rear and the gunner sits in the front. The rear section is raised above the front section so the pilot can see clearly.
Photo courtesy U.S. Department of Defense

The Apache cockpit is divided into two sections, one directly behind the other. The pilot sits in the rear section, and the co-pilot/gunner sits in the front section. As you might expect, the pilot maneuvers the helicopter and the gunner aims and fires the weapons. Both sections of the cockpit include flight and firing controls in case one pilot needs to take over full operation.

On the Longbow Apache, three display panels provide the pilot with most navigation and flight information. These digital displays are much easier to read than traditional instrument dials. The pilot simply presses buttons on the side of the display to find the information he or she needs.

We'll look at the Apache's sensor equipment next.