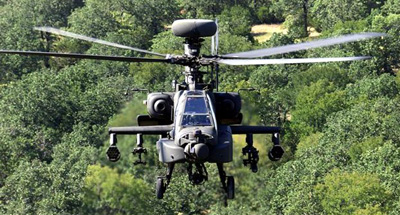 The Apache Longbow has a distinctive radar dome mounted to its mast.
Photo courtesy U.S. Department of Defense

One of the coolest things about the Apache is its sophisticated sensor equipment. The Longbow Apache detects surrounding ground forces, aircraft and buildings using a radar dome mounted to the mast. The radar dome uses millimeter radio waves that can make out the shape of anything in range. The radar signal processor compares these shapes to a database of tanks, trucks, other aircraft and equipment to identify the general class of each potential target. The computer pinpoints these targets on the pilot's and gunner's display panels.

The computer transmits the night vision or video picture to a small display unit in each pilot's helmet. The video display projects the image onto a monocular lens in front of the pilot's right eye. Infrared sensors in the cockpit track how the pilot positions the helmet and relay this information to the turret control system. Each pilot can aim the sensors by simply moving his or her head! Manual controls are also available, of course. (See this U.S. Army Apache page for more information on the helmet targeting system.)

The helmet targeting system in an Apache helicopter

Next, let's look at a few of the systems that protect the pilot and gunner during battle.