An Overview of the Spacecraft 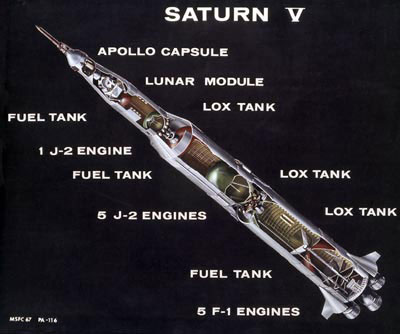 On the launchpad, the combination of the Apollo spacecraft and Saturn V launch vehicle was an imposing sight.

In contrast, when the Apollo spacecraft re-entered the Earth's atmosphere and landed in the ocean, it was just shy of 11 feet tall. That's because NASA intended for only the command module to return to Earth in one piece -- everything else was jettisoned either over the Atlantic Ocean or into space.

The cost of the program was estimated at more than $25 billion, which would be more than $100 billion today when adjusted for inflation [source: NASA]. Most of that money was spent designing, building and refining the complex systems and machinery required to transport men to and from the moon safely. NASA allocated the rest of the budget for astronaut training, ground control systems and related expenses.

Now that we've got an overview, let's take a closer look at each of these components. We'll start with the Saturn V launch vehicle in the next section.