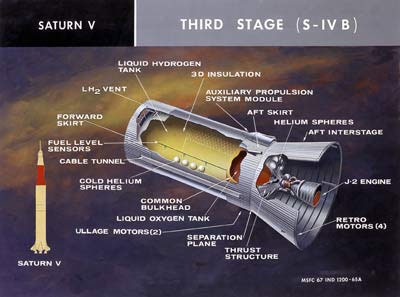 The Saturn V launch vehicle packed a lot of power into its three-stage structure. The rocket consisted of three sections bolted together: The base section was stage I, above which was stage II and on top of which was stage III. At the very top of the rocket sat the Saturn V's instrument panel and control system, which automatically guided the sequence of ignitions required to launch the Apollo spacecraft into orbit.

Let's look at each of these sections in turn:

While launches were impressive to watch and relied on a complex series of controlled ignitions, they were just the tip of the iceberg for the Apollo missions. Where were the astronauts during the launch, and from where did they control the spacecraft? Find out in the next section.