The Apollo Command and Service Modules 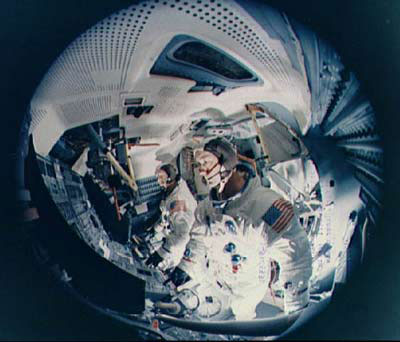 ­The comma­nd module was where the astronauts spent almost all of their time and was the only section of the spacecraft designed to return to Earth intact. With its heat shield, it was 12 feet, 10 inches tall (about 3.9 m) and weighed 12,250 pounds (5.5 metric tons). Inside, the astronauts had about 210 cubic feet (64 m) of habitable space -- the rest of the space inside the vehicle was dedicated to control panels and displays. The CM held a crew of three astronauts. At launch, the three men would sit on a couch that they could later fold and stow away when they entered space.

Engineers built the CM using sheet aluminum for the inner structure. On the outside of the CM was a heat shield of brazed stainless steel coated with resin. Without the heat shield, the astronauts would not have survived re-entry into the Earth's atmosphere at the end of the mission.

The service module was a 24.6 foot (7.5 meters) tall cylinder. It was 12.8 feet (3.9 meters) wide and weighed a whopping 51,243 pounds (23,243.4 kilograms) at launch. The SM had six sections inside, which contained a propulsion system, tanks for fuel and oxidizer material, helium tanks used to pressurize the fuel system, fuel cells and tanks of oxygen and hydrogen. The fuel cells provided the power for most of the crew's needs during the mission, but both the SM and CM also carried batteries to supplement power.

For most of the mission's flight, the CM and SM remained connected together. The CM relied on the SM's systems for most of its operations. Because of this, some people refer to the two units as a single entity: The CSM.

There wasn't much elbow room in the Apollo command module during takeoff and landing.
Image courtesy NASA

­The top of the CSM contained a probe mechanism the astronauts used to dock with the LM. Once the spacecraft lunar module adapter separated from the rest of the vehicle, the Apollo spacecraft detached the LM from its base. Using reaction control engines (RCEs), the CSM adjusted its alignment so that the top of the CM faced a funnel-shaped device in the LM called a drogue. The astronauts in the CSM would align the probe so that it docked with the LM's drogue. Once docked, 12 automatic latches secured the LM to the top of the CM. In other words, the LM moved from behind the CSM to the front of it. Astronauts could remove the probe and drogue assemblies from inside the spacecraft, allowing the crew to move between the two modules.

To make space travel possible -- and safe -- the CSM had to integrate several complex support systems. Keep reading to learn how astronauts could accomplish their missions by relying on these systems.