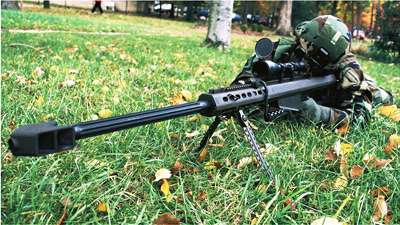 Ranger companies are supported by three sniper teams, including a team outfitted with .50-caliber guns like this one.
Photo courtesy U.S. Army

At the outset of the Korean War, the 75th Ranger Regiment was created and headquartered at Fort Benning, Ga. The volunteer pool was drawn exclusively from the 82nd Airborne Division. That recruiting tradition continues today: All Ranger candidates are required to have first graduated from airborne school before becoming an official Ranger.

To be selected as a Ranger, a soldier must prove that he's physically capable and most undergo calisthenics and endurance tests like long runs and hikes. Once he's accepted to Ranger school, his training begins. Training is split into three different phases: crawl, walk and run.

Though it was activated at the beginning of the Korean War, the 75th Ranger Regiment was deactivated after hostility ceased. The Regiment was similarly activated and deactivated for the Vietnam War. It wasn't until one commander recognized the value of having a Ranger force at the ready that a continuous Ranger unit was established. Chief of Staff for the Army, General Creighton Abrams, ordered the establishment of the 1st Ranger Battalion of the 75th Ranger Regiment in 1974 [source: SpecialOperations.com]. This was the first time that a Ranger force was ever activated during peacetime and lead to the formation of the 75th's current structure:

Each battalion is composed of a Headquarters and Headquarters Command (HHC) and three rifle companies. Battalions are made up of no more than 580 Rangers: Each rifle company consists of 152 riflemen, and the remaining Rangers make up the fire support and headquarters staff.

Rangers' fire support is vital to their operations. The Ranger weapon company provides moderate firepower to Ranger operations, including heavy machine guns, Stinger missiles, a mortar group and the Carl Gustav Anti-Armor Weapon. The Gustav, unique to the Ranger forces, is a shoulder-fired launcher, capable of firing a variety of rounds, including armor-piercing ammunition and smoke rounds. In addition, fire support includes two two-man sniper teams and a third two-man .50-caliber sniper team. Even with these weapons, they are still a light-infantry troop. For larger fire support, Rangers must rely on the company on whose behalf or in whose support they are carrying out a mission.

The Ranger Regiment is capable of deploying anywhere within 18 hours. This is possible through the Ranger Ready Force (RRF), a 13-week designation that rotates between the three battalions. When a battalion is the designated RRF, they can't perform any off-base exercises or training. All soldiers receive inoculations, and all weapons are checked for readiness and replaced if necessary. All supplies needed for a mission are crated and packaged.

In the next section, we'll learn about the kind of operations Rangers carry out once they're tapped for a mission. ­