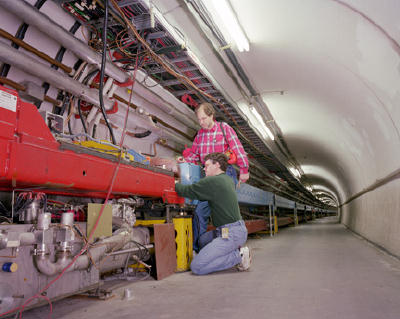 The main ring is located inside a concrete tunnel underground.
Photo courtesy Fermilab

Because accelerated particles are forced to change speeds, change directions or hit targets, they lose energy. This energy is often in the form of ionizing radiation like x-rays or gamma rays. In addition to radiation, energized particles themselves present a hazard to human health. To prevent leakage of radiation while the accelerators are in operation, they are shielded. Accelerator structures are often located in concrete tunnels underground. The concrete and the earth shield the environment. Technicians are not in the tunnels when the accelerators are operating, and control rooms are shielded with concrete. In addition, workers wear radiation badges and are monitored constantly. Particle accelerators in the United States fall under the jurisdiction of the Nuclear Regulatory Commission, which licenses their use and regularly inspects them for safety. If the accelerator is affiliated with a university, the university's radiation safety office also participates in this process.

The tunnels are often equipped with closed circuit televisions to monitor the equipment and gauges within the accelerator. Radiation detectors are located throughout the accelerator structures to monitor for leakage in the shielding and protect the workers.

As you can guess from our description of the equipment, particle accelerators use a lot of electricity. In some places, this is supplied through the local power company. Some accelerators have their own electric generators on-site.

Because it takes so much effort to accelerate particles for an experiment, many accelerators have storage rings. Storage rings maintain a beam that has already been accelerated. For example, if you are colliding an electron beam with a positron beam, you may have to keep one beam in storage while you accelerate the other. A storage ring has the same components as the main accelerator but with fewer klystrons. The particles travel around the ring at the accelerated speed, needing only one or two klystrons to compensate for any lost energy as the beam changes directions.

Now that we've seen what's inside an accelerator, let's see what can we learn from these devices.