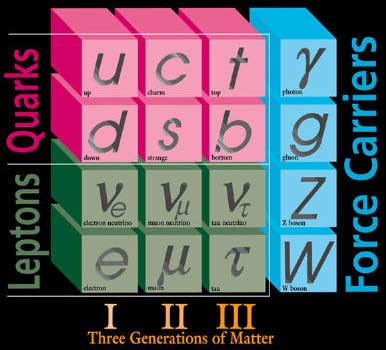 With all of this technology, what have we learned about the structure of matter? When physicists first began using accelerators in the 1950s and1960s, they discovered hundreds of particles smaller than the three well-known subatomic particles -- protons, neutrons and electrons. As bigger accelerators were built, ones that could provide higher energy beams, more particles were found. Most of these particles exist for only fractions (less than a billionth) of a second, and some particles combine to form more stable composite particles. Some particles are involved in the forces that hold the nucleus of the atom together, and some are not. In examining this complicated picture, a standard model of the atom has emerged.

According to this model, matter can be divided into the following building blocks:

In the next section, we'll delve into the details of each of these subatomic particles.

There are four fundamental forces or interactions: