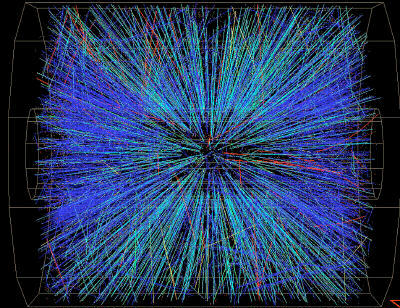 In the 1930s, scientists investigated cosmic rays. When these highly energetic particles (protons) from outer space hit atoms of lead (i.e. nuclei of the atoms), many smaller particles were sprayed out. These particles were not protons or neutrons, but were much smaller. Therefore, scientists concluded that the nucleus must be made of smaller, more elementary particles. The search began for these particles.

At that time, the only way to collide highly energetic particles with atoms was to go to a mountaintop where cosmic rays were more common, and conduct the experiments there. However, physicists soon built devices called particle accelerators, or atom smashers. In these devices, you accelerate particles to high speeds -- high kinetic energies -- and collide them with target atoms. The resulting pieces from the collision, as well as emitted radiation, are detected and analyzed. The information tells us about the particles that make up the atom and the forces that hold the atom together. A particle accelerator experiment has been described as determining the structure of a television by looking at the pieces after it has been dropped from the Empire State Building.