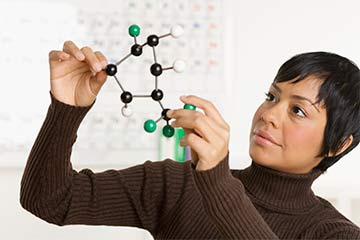 How many billion billion atoms are inside you? And which elements do they comprise?
JGI/Blend Images/Thinkstock

It's your shining moment. You make a few last-minute wardrobe adjustments, grasp the microphone and walk to the center of the stage, blinded by the spotlight and overwhelmed by the cheers of your fans.

You are a star. And it doesn't matter whether you can act, dance or sing -- or even if you have ever landed a spot on "American Idol." You're still a star. In fact, we all are.

Nearly every atom in every human's body was crafted billions of years ago by a star. As stars burned, exploded and eventually died, they created these basic elements that now appear in everything from stones and buildings to butterflies -- and humans. The exceptions to our star-based elemental origins are hydrogen and other lightweight elements thought to have formed even earlier, at the very beginning of the universe [source: Tyson].

In the end, we're all made up of the same fundamental pieces of matter: atoms. Each atom contains three small subatomic particles -- protons, neutrons and electrons. In the center of the atom, the protons and neutrons gather to form the nucleus, while the electrons zip around that nucleus as if they are minute planets orbiting their own little sun [source: Northwestern].

A human body weighing 154 pounds (70 kilograms) is comprised of 7 billion billion billion atoms, which is a 7 followed by 27 zeros. It includes a variety of different types of atoms -- only few of which the average person is probably familiar with.

Of these atoms, three types make up the majority. Case in point? Ninety-nine percent of the atoms in the human body can be divided into the following amounts: 65 percent hydrogen, 24 percent oxygen and 10 percent carbon. The remaining 1 percent includes trace elements like zirconium, radium, boron, copper and lead [sources: Freitas, Kross].

Despite the vast number of atoms in the human body, we are still surprisingly full of empty space. If all this empty space were squeezed out of the people who make up the human race, our bodies would become so compact that they could be contained in a box the size of a sugar cube. Even more mind-blowing, the stars, planets and everything they contain, including humans, make up only 4 percent of the mass of the known universe. The remainder, scientists believe, is comprised of dark matter and dark energy, which are, as of yet, not well understood [source: Chown].

What would nuclear winter be like?
Lucky Tetrachromats See World With Up to 100 Million Colors
5 Baffling Subatomic Particles