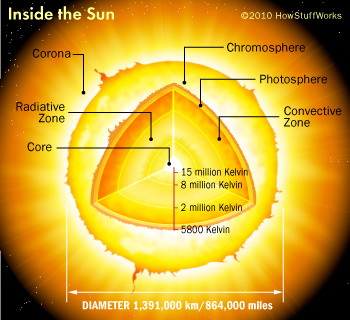 At the center of our solar system is an enormous nuclear generator. The Earth revolves around this massive body at an average distance of 93 million miles (149.6 million kilometers). It's a star we call the sun. The sun provides us with the energy necessary for life. But could scientists create a miniaturized version here on Earth?

It's not just possible -- it's already been done. If you think of a star as a nuclear fusion machine, mankind has duplicated the nature of stars on Earth. But this revelation has qualifiers. The examples of fusion here on Earth are on a small scale and last for just a few seconds at most.

To understand how scientists can make a star, it's necessary to learn what stars are made of and how fusion works. The sun is about 75 percent hydrogen and 24 percent helium. Heavier elements make up the final percent of the sun's mass. The core of the sun is intensely hot -- temperatures are greater than 15 million degrees Kelvin (nearly 27 million degrees Fahrenheit or just under 15 million degrees Celsius).

At these temperatures, the hydrogen atoms absorb so much energy that they fuse together. This isn't a trivial matter. The nucleus of a hydrogen atom is a single proton. To fuse two protons together requires enough energy to overcome electromagnetic force. That's because protons are positively charged. If you're familiar with magnets, you know that similar charges repel each other. But if you have enough energy to overcome this force, you can fuse the two nuclei into one.

What you're left with after this initial fusion is deuterium, an isotope of hydrogen. It's an atom with one proton and one neutron. Fusing deuterium with hydrogen creates helium-3. Fusing two helium-3 atoms together creates helium-4 and two hydrogen atoms. If you break all that down, it essentially means that four hydrogen atoms fuse to create a single helium-4 atom.

Here's where energy comes into play. A helium-4 atom has less mass than four hydrogen atoms collectively. So where does that extra mass go? It's converted into energy. And as Einstein's famous equation tells us, energy is equal to the mass of an object times the speed of light squared. That means the mass of the tiniest particle is equivalent to an enormous amount of energy.

So how can scientists create a star? 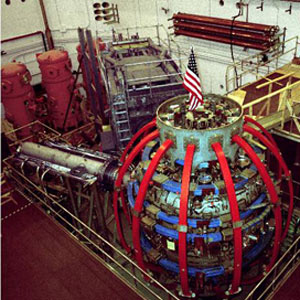 Learn more about stars and energy by following the links on the next page.