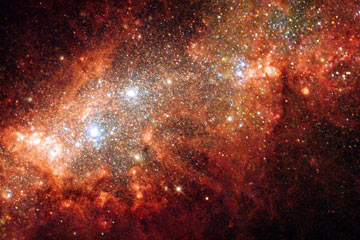 Dark energy and dark matter account for most of the universe, but what are these elusive phenomena?
NASA/JPL/Hubble

NASA's Wilkinson Microwave Anisotropy Probe (WMAP) provided a true watershed moment in humanity's quest to understand the cosmos. Its findings calculated the age of the universe and plotted the curvature of space. It mapped the cosmic microwave background radiation and, in a shocking turn of events, revealed that atoms make up only 4.6 percent of the universe.

WMAP launched in 2001, but the dark energy problem presented itself before -- back in 1998 when the Hubble Space Telescope observed three very curious supernovae. The most distant of these cosmic blasts occurred 7.7 billion years ago, more than halfway back to the big bang itself [source: Hubblesite]. This insight into the ancient cosmos revealed that the expansion of the universe hasn't been slowing, but rather accelerating. That threw astronomers for a loop, most of whom had assumed before this revelation that the expansion had slowed over time due to gravity.

We might not know what dark energy is just yet, but scientists have a few leading theories. Some experts believe it to be a property of space itself, which agrees with one of Einstein's earlier gravity theories. In this, dark energy would be a cosmological constant and therefore wouldn't dilute as space expands. Another partially disproven theory defines dark energy as a new type of matter. Dubbed "quintessence," this substance would fill the universe like a fluid and exhibit negative gravitational mass [source: NASA]. Other theories involve the possibilities that dark energy doesn't occur uniformly, or that our current theory of gravity is incorrect.

Dark matter, by comparison, is far better understood. It doesn't emit or reflect light, but scientists can estimate where it is based on its gravitational effects on surrounding matter. Scientists use a technique called gravitational lensing to accomplish this, observing the way dark matter's gravitational pull bends and distorts light from distant galaxies.

These observations rule out stars, antimatter, dark clouds or any form of normal matter. Some scientists consider supermassive black holes a potential candidate for dark matter, while others favor either MACHOs (massive compact halo objects) and WIMPs (weakly interacting massive particles). MACHOs include brown dwarfs, weak stars that exert a gravitational pull but emit no light. WIMPs, on the other hand, would constitute a radically different form of matter left over from the big bang.

Research into the exact nature of dark matter and dark energy continue. In due course, scientists hope to discern a clearer understanding of these two glaring (or dark), cosmic unknowns.

How Carl Sagan Worked
What Is Solar Wind?
What Existed Before the Big Bang? 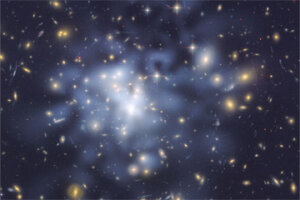