by John Perritano Jan 25, 2019
This aerial view shows the difference in size between the current Large Hadron Collider and the new Future Circular Collider proposed by physicists at CERN. CERN

When the world's largest and most powerful particle accelerator, the Large Hadron Collider (LHC) went online in 2008, it became the most powerful and complex machine humans had ever created. The LHC is a 16-mile-long (25.7-mile-long) underground ring, located in Geneva, Switzerland, and physicists use it to collide protons at nearly the speed of light in hopes of answering age-old questions on extremely complex issues like dark matter and the origins of the universe.

Now, the European Organization for Nuclear Research (CERN), which runs the LHC, has announced that it plans to build an even larger collider in an attempt to answer the legion of questions that still remain about the universe.

The Future Circular Collider (FCC) — as it's been dubbed — would have a circumference of 62 miles (100 kilometers), dwarfing the existing LHC by 35 miles (56 kilometers). It would also have 10 times the atom-smashing power. CERN released its conceptual design and report in January 2019. Researchers hope to have the accelerator online by 2050 at a cost of more than $22 billion. Construction would involve digging a new tunnel under CERN and then installing the hardware, including behemoth magnets that would allow particles to collide with one another.

According to CERN, the FCC's main task will be to plumb the depths of the universe by smashing atoms into one another at unimaginable speeds — far faster than the LHC. Scientists will then study those collisions to see what new particles may emerge. The idea is to explore more deeply the kinds of matter that helped create the universe soon after the Big Bang. In 2012, scientists working at the LHC confirmed the discovery of the Higgs boson, the so-called "God Particle," that gives matter its mass.

Physicists hope the proposed high-energy atom smasher will reveal new particles — undiscovered by the LHC — that will tell us how the universe works. All of these queries are intriguing considering that galaxies are rotating faster than they should and the universe itself is rapidly expanding. What is fueling these changes is a mystery, which theoretically speaking, means that some particles have yet to be discovered.

Still, some physicists are skeptical that a new particle accelerator is even necessary. Since the discovery of the Higgs boson, tests at the LHC haven't turned up any new particles or signs of major breakthroughs. Sabine Hossenfelder, a research fellow at the Frankfurt Institute for Advanced Studies, penned an OpEd for The New York Times questioning its necessity, saying among other things, that the $10 billion price tag alone makes it questionable. She went on to say that theoretical physics is about making predictions — and to date the only prediction to come true out of the LHC has been the discovery of the Higgs boson. And to suggest a new, larger collider, will find more particles that will give us answers about the origins of our universe just isn't true.

Editor's note: Since the original publication of this story, a physicist from CERN contacted us to dispute several of the claims made by Sabine Hossendfelder in her New York Times OpEd. Specifically he maintains that new hadrons and other rare processes have in fact been observed using the LHC.

Now That's Interesting
One of the jobs of atom-smashers is to figure out how dark matter works. Dark matter is tough to spot because it does not interact with electromagnetism. Some scientists theorize that dark matter would escape the detectors of a particle accelerator, but its existence could be inferred by the amount of energy and momentum that was "missing" after particles smash into one another.

Male Cheerleaders to Perform in Super Bowl for First Time Ever 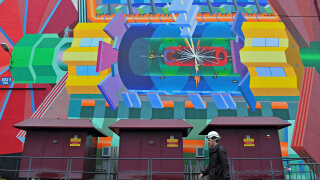 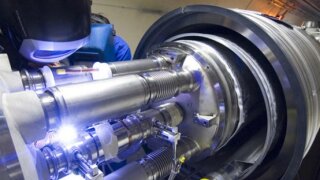 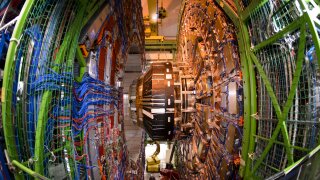