How the FSF-1 Sea Fighter Works 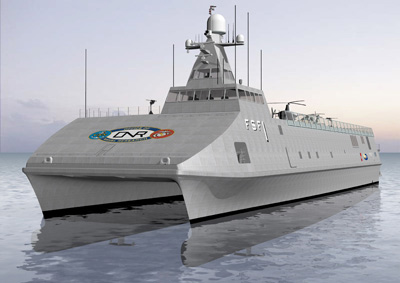 In the changing and shrinking global landscape of the 21st century, international militaries must alter their weaponry to combat a new breed of enemies. Historically, naval warships were massive, floating fortresses designed to face off with enemy ships in the open sea or bombard an enemy's coastline from miles offshore. Today, the threat of a more guerilla-style warfare is forcing nations to develop faster, more flexible ships.

In February 2005, the U.S. Navy christened the FSF-1 Sea Fighter, formerly known as the X-Craft. The Sea Fighter is a high-speed, experimental vessel that will test a variety of technologies, including the ability to operate in shallow waters near shore amid mines and small suicide boats.

In this article, we'll take a look at this revolutionary new warship and the technologies that could permanently alter sea warfare.

A New Design for a New Mission 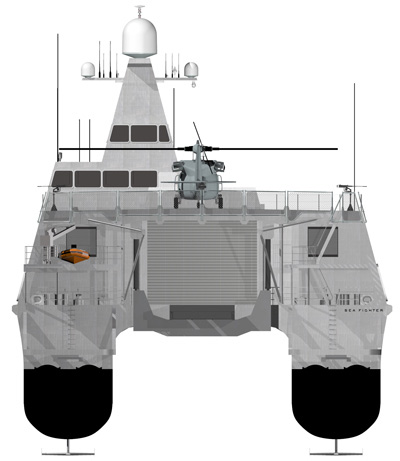 A multi-purpose stern ramp will allow Sea Fighter to launch and recover manned and unmanned surface and sub-surface vehicles up to the size of a Rigid-Hull Inflatable Boat.
Photo courtesy U.S. Navy

The Sea Fighter is an aluminum catamaran designed to operate effectively in littoral, or coastal, waters. It can maneuver in as little as 11 feet (3.35 m) of water. The hull number FSF-1 stands for "fast sea frame" and is the first U.S. Naval vessel to have a catamaran design. The experimental vessel will be used to test the hydrodynamic performance, structural performance, structural behavior, mission flexibility and propulsion-system efficiency of high-speed vessels.

The ship's design is flexible to meet the needs of multiple missions. More than 12 20-foot mission modules can be housed in the ship's mission bay, which allows the vessel to be quickly reconfigured to support a variety of potential tasks including battle force protection, mine countermeasures, anti-submarine warfare, amphibious assault support and humanitarian support.

A multi-purpose stern ramp allows the ship to launch and recover manned and unmanned surface and sub-surface vehicles up to the size of an 11-meter Rigid Hull Inflatable Boat (RHIB). From its flight deck, the Sea Fighter can operate while supporting two H-60 helicopters or vertical takeoff and landing tactical unmanned aerial vehicles (VTUAV) at a time.

From its flight deck, the Sea Fighter will be able to support 24-hour-a-day operations for up to two H-60 helicopters or VTUAVs.
Photo courtesy U.S. Navy

To reduce vibration and noise, many of the ship's internal surfaces are covered with a coating of QuietShip, a viscoelastic polymer that can be applied to aluminum, steel and composite-hull vessels. The coating offers naval ship builders a way to reduce noise by up to 70 percent, according to developer Quiet Solution. On the Sea Fighter, QuietShip reduces noise by 15 decibels.

The Sports Car of the Seas 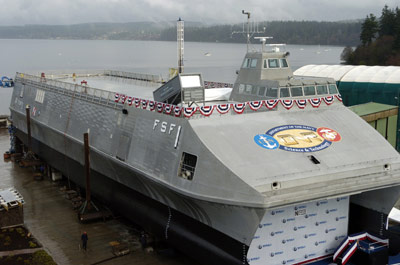 Compared to larger, conventional warships, the Sea Fighter is faster and more agile. Some have compared its performance to that of sports car. The Sea Fighter can reach a top speed of 50 knots (57.5 mph, 92.6 kph) with a full payload and is designed to reach speeds of 40 knots (46 mph, 74 km/hr) in rough seas with waves up to 7 feet (2.13 meters). 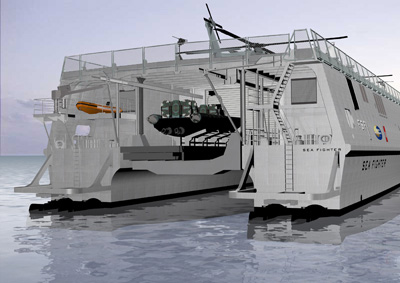 Changes to the crew are nearly as revolutionary as the ship's design. The small Sea Fighter requires a crew of just 26 (16 Navy sailors and 10 Coast Guardsmen). The crew is made up of five officers and 21 enlisted personnel. With such a small crew, each member must be very knowledgeable of the ship and balance multiple duties.

"The thing that's really unique about this crew is that since there's only 26 of us, the engineers can't concentrate just on engineering and the navigators can't just concentrate on navigation," said Navy Lt. Cmdr. Brandon Bryan. "Everyone has to know everyone else's business. So my engineers know how to drive the ship, my guys who drive the ship know how to go down and start the diesel."

The mix of Navy and Coast Guard crew will also provide a cross-section of expertise that can be used for various missions.

"I think the Navy brings their vast experience of operating in a Department of Defense environment," said Coast Guard Chief Operations Specialist John Leary. "And the Coast Guard will bring its unique international boarding authority that we have for international activities. Plus, we have more experience manning ships with smaller crews."

Inside the ship, the crew sleeps in three-man staterooms, a major difference from the large communal compartments on most naval ships. The ship can also be configured to accommodate a crew of men and women.

While the Sea Fighter is a test vehicle, elements of it will be used in other future Navy and Coast Guard ships, including the larger Littoral Combat Ship and the Coast Guard's Deepwater concept.

For more information on the Sea Fighter and related topics, check out the links on the next page.