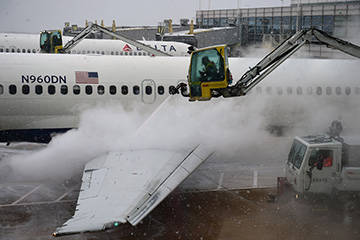 As you're sitting on the runway, watching snow or sleet or freezing rain come down and thinking about how it might be covering your car or your house or the sidewalk, consider that it's also covering the airplane you're about to take off in. While ice on your personal belongings or your sidewalk may cause some consternation, ice on an airplane is an enormous safety consideration for a large number of people. It's not that the ice is heavy or will freeze some essential part of the plane, which would make it unsafe. It's that a coating of ice on an airplane will disrupt airflow around an airplane's wings and affect the lift, which is the ability of the plane to fly. That's not something you want ice, or anything else, to mess with.

Deicing is the process of removing ice from the plane. A second step, called anti-icing, may also be required to keep ice from forming again once it's been removed. Here's how these two processes work to keep airplanes — and their crews and passengers — safe in the skies.

Deicing agents are compounds made up of the chemical glycol and water. Glycol lowers the freezing point of the solvent, water [source: Ritter]. The agents are used in different formulations for different weather conditions, but whatever the formulation, the compound is applied in the same way. It is heated and sprayed through a hose over an airplane to remove snow, ice or frost. Pilots make the call for deicing when necessary and oversee the process, which must be done in accordance with detailed Federal Aviation Administration (FAA) rules. In fact, the FAA rules chapter on deicing runs more than 30 pages and covers everything from makeup and handling of the deicing compound to its application, how quickly it must be applied and the documentation required following each deicing occurrence.

Speed and thoroughness are essential in applying deicer. As such, applications must be performed in a timely and well-ordered fashion, with an eye on what's called holdover time, the amount of time following deicing before the plane has iced-over again and must be re-treated. Holdover time varies based on the makeup of the compound and is set by the fluid manufacturer. With deicing compounds costing upwards of $5 per gallon, the procedure can cost thousands of dollars (factoring in handling and storage costs) , so it's essential that holdover times not be exceeded [source: Smith]. Holdover time also explains why deicing is performed after everyone is on board and the plane is otherwise ready to take off. Holdover time may only be a few minutes, so the plane must be ready to taxi onto the runway and get into the air soon after deicers are applied.

Deicing agents are generally not designed to keep ice or frost from re-forming on the plane. So, if snow, sleet or freezing rain is actively falling as an airplane is being deiced, the plane may also need an anti-icing application to keep ice from re-forming before the plane takes off. Anti-icing fluids are also made up of glycol and water, but with a higher concentration of glycol than deicing fluids. A thickening agent is added to help the compound adhere to the plane as it takes off.

A thin layer of anti-icing agent is sprayed uniformly over the plane when required. The FAA recommends that anti-icing agents be applied within three minutes of deicing and not at all if the deicing fluid has frozen or if frost has reformed on the plane. If either of those situations occur, deicing must be performed again before the anti-icing fluid is applied.

If the plane is coated with just a dusting of frost, rather than ice, it may be possible to deice and anti-ice at the same time. In this instance, the anti-icing fluid is used and acts as both a deicer, to melt the frost, and an anti-icer, which protects the airplane from further icing.

According to the FAA, the parts of the plane that may require deicing and anti-icing are:

The ground crew and flight crew must work together to make decisions about which surfaces need deicing and the best procedure to use based on temperature and weather conditions. Most often, deicing and anti-icing procedures are performed at the gate, though they can be done at remote locations — again, the concern is getting the plane in the air in a timely manner once the fluids are applied.

The FAA recommends that two to four deicing vehicles be used for commercial jets. The procedure begins at the front of the fuselage, working back to the wings, then the aft-fuselage, vertical stabilizer and finally the horizontal stabilizer (the latter two are parts of the plane's tail).

Once in the air, the plane itself is designed with systems to keep ice from coating the surface. These systems are essential in summer, as well as winter, because the temperature at higher altitudes is below freezing year-round. On most commercial jets, pipes carry hot air generated by the engines to the wings and tail to keep them warm and prevent icing. On other aircraft, balloon-like objects inflate and deflate to break up any accumulation. Airplanes also have built-in redundancies in each of these systems to ensure that if there's a problem with one, another system takes over to keep the ice away.

While passengers may be concerned with the flight delays that can go along with deicing their plane, there are greater issues as well. Flight delays can disrupt travel for thousands of passengers at airports around the U.S. and the world, even at those airports in warm, sunny climates. In addition, there are concerns about the environmental impact of deicers, which may be sprayed over many airplanes in a short amount of time, with gallons of overspray going into the ground.

New research, inspired by the biological makeup of the poison dart frog, may make deicing a more efficient and environmentally friendly process in the future. Poison dart frogs have a double layer of skin — one on the outside that can sense threats and an inner layer that releases the toxin when the frog is threatened.

A scientist has proposed a deicing process that would work in a similar fashion. An outer skin on an airplane would be superhydrophobic, which means that water droplets would just roll off of it. If the weather was extremely bad and droplets did begin to freeze on the plane, the inner layer would sense the freezing and release antifreeze from the inside, to flow across the airplane's outer "skin." This would deice the plane only in places where needed, rather than in bulk, the way it's done now. While this research (published in a journal in 2015) has been successful in the lab, it is likely years, maybe even decades away from being used routinely on airplanes [source: Casey].

Until then, try to remain calm and phatient if your flight is delayed due to deicing. Thanks to the detailed and successful FAA deicing procedures, airplane crashes because of ice on the wings or other parts of the plane have become extremely rare.

Author's Note: How do they deice airplanes?

My dad is a pilot — private planes only — so I have absorbed a good bit of info over the years about airplanes and flying. However, we both have always lived in the South where deicing planes isn't an everyday occurrence. Next time I hear about flight delays due to deicing, I'll be even more grateful that I live where it's generally sunny and warm, and will thank those chemists who've created the compounds that make airplane travel safer and safer.