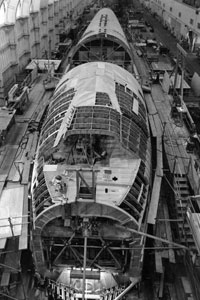 Howard Hughes' enormous H-4 Hercules may still hold the record for wingspan. But that doesn't mean there's not a bigger plane out there. See more flight pictures.
Keystone Features/Getty Images

Achieving controllable flight has not been an easy endeavor. Or a quickly advancing one. As early as 400 B.C., innovators in China were using specially designed kites to test weather conditions [source: NASA]. More than 2,000 years later, the Montgolfier brothers flew the first hot air balloon, carrying a (presumably surprised) rooster, duck and sheep to an altitude of 6,000 feet (1,800 meters) for more than a mile [source: NASA].

The quest moved more quickly after that, with gliders, steam-powered flying machines and finally the Wright brothers' first biplane success unfolding over the next 120 years [source: NASA]. With a working, motorized airplane at last on record, man turned to his natural inclination and set about enlarging it. Howard Hughes' infamous H-4 Hercules seaplane (aka Spruce Goose), which took off for its one and only, 1-mile (1.6-kilometer) flight in 1947, still holds the record for wingspan at nearly 320 feet (97.5 meters) [source: Malone].

Still, the A380 is not the largest aircraft. It's not even that close.

In this article, we'll find out which plane has the distinction of "largest" and how that honor is typically determined. It's not easy to find universal criteria for ranking aircraft, but there is one way many experts can agree on: maximum takeoff weight.

And there is one plane that outshines all others in how much it can lift off the ground.

The Biggest Airplane in the World 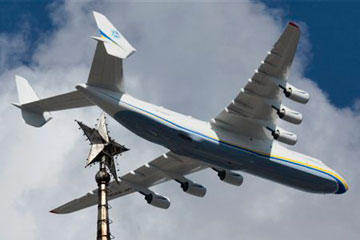 While length, height, wingspan and empty weight are all valid criteria in ranking aircraft, the one most often used to determine which plane is biggest is the maximum takeoff weight (MTOW). That's the most a plane can weigh and still get off the ground; it incorporates not only the weight of the plane but also its fuel supply and cargo (human or otherwise).

Using the MTOW criteria, it's not hard to pick a winner. It's the Antonov An-225.

The An-225 is a cargo jet. It transports vehicles, supplies and all sorts of aid all over the world. But it began its life serving a different purpose. It was built to haul around the Buran, Russia's space shuttle. When the Russian space program was discontinued in the early '90s, the An-225 found itself unemployed and went into storage.

Years later, one of the two An-225s in existence found a new role as a commercial cargo jet (the second remains in storage to this day). It's ideally suited to the role because of both its size and its maximum takeoff weight. It can accommodate 46,000 cubic feet (1,300 cubic meters) of cargo. That's enough for five military tanks or eight double-decker buses [source: BC]. More important, with a maximum takeoff weight of 1.32 million pounds (600,000 kilograms), it can get those tanks or buses off the ground -- and fly them almost 3,000 miles (4,800 kilometers) to their destination [source: Aerospace, Eisenstein].

While the An-225 tops all aircraft, and the A380 beats out every other passenger plane, the future of aircraft design could make going even bigger a little easier. Increasingly lightweight composite materials are allowing for more size without more weight, and advances in aviation technology and flight design are making it easier to get more weight off the ground. With the A380 in service as of 2007, we can no doubt look forward to seeing progressively massive airliners in development in coming years [source: FG].

For more information on aircraft and the An-225, including complete specifications, look over the links on the next page.

How Drones Work
Will Drones Replace News Helicopters?
When Your Face Is Your Boarding Pass