More on the Big Bang Story 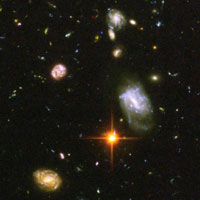 Images of ancient galaxies taken by the Hubble Telescope.
Courtesy STSci and NASA

Hubble theorized that the universe expands as time passes. That meant that billions of years ago, the universe would have been much smaller and more dense. If you go back far enough, the univers­e would collapse into an area with infinite density, containing all the matter, energy, space and time of the universe. In a way, the big bang theory came as a result of backwards engineering.

Some people had a real problem with this theory. Among them was the famous physicist Albert Einstein. Einstein subscribed to the belief that the universe was static. A static universe doesn't change. It has always been and always will be the same. Einstein hoped his theory of general relativity would give him a deeper understanding of the structure of the universe.

Upon completion of his theory, Einstein was surprised to discover that according to his calculations, the universe would have to be expanding or contracting. Since that conflicted with his belief that the universe was static, he searched around for a possible explanation. He proposed a cosmological constant -- a number that, when included in his general theory of relativity, explained away the apparent necessity for the universe to expand or contract.

When confronted with Hubble's findings, Einstein admitted that he was mistaken. The universe did seem to be expanding, and Einstein's own theory supported the conclusion. The theory and observations gave rise to a few predictions, many of which have since been observed.

One of those predictions is that the universe is both homogeneous and isotropic. Essentially, that means the universe looks the same no matter what the perspective of the observer. On a localized level, this prediction seems false. After all, not every star has a solar system­ of planets like ours. Not every galaxy looks the same. But on a macroscopic level that spans millions of light years, the distribution of matter in the universe is statistically homogeneous. That means even if you were across the universe, your observations of the structure of the universe would look the same as those here on Earth.

Another prediction was that the universe would have been intensely hot during the earliest stages of the big bang. The radiation from this period would have been phenomenally large, and there would have to be some evidence of this radiation left over. Since the universe must be homogeneous and isotropic, the evidence should be evenly distributed throughout the universe. Scientists discovered evidence of this radiation as early as the 1940s, though at the time they didn't know what they had found. It wasn't until the 1960s when two separate teams of scientists discovered what we now call the cosmic microwave background radiation (CMB). The CMB is the remnants of the intense energy emitted by the primordial fireball in the big bang. It was once intensely hot, but now has cooled to a chilly 2.725 degrees Kelvin (-270.4 degrees Celsius or -454.8 degrees Fahrenheit).

This image of the cosmic microwave background radiation was taken by the Wilkinson Microwave Anisotropy Probe.
Courtesy NASA

These observations helped solidify the big bang theory as the predominant model for the evolution of the universe.

We'll show you what scientists think happened during the big bang on the next page.

One of These Days

Scientists use Hubble's observations to estimate the age of the universe. Current estimations based on the Hubble constant are at 13.7 billion years, give or take 200 million years. Other methods for estimating the age depend on determining the ages of stars and elements. Those methods give us a range that tops out at around 15 billion years.