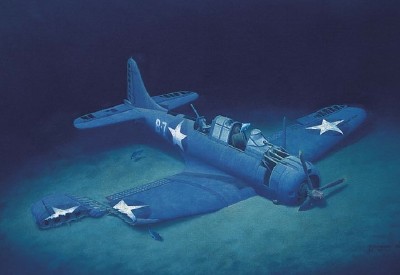 The Douglas SBD Dauntless was a carrier-based dive bomber, a compact scrapper with a gift for sinking Japanese carriers and other large ships. Here, a Dauntless is depicted undersea, at final rest. See more flight pictures.
m

Few aircraft have names that so well describe their character -- the Douglas SBD Dauntless is one. Fewer still have not one but two designers of genius influential in their creation, and fewest of all are given the honor of reversing the course of a war in a single sortie.

The word "dauntless" well describes the beautiful little low-wing monoplane from Douglas, for it fought against great odds throughout World War II, diving through ferocious flak to engage the Japanese at point-blank range. The Dauntless SBD Dauntless was derived from the inspiration of the great aircraft executive Jack Northrop, better known for his fabulous "flying wings"; and the meticulous insight and genius of engineer/designer Edward H. Heinemann.

In just a few moments at the Battle of Midway in June 1942, the gallant SBDs swept out of the sunlit sky to break the back of the Imperial Japanese Navy, sinking four aircraft carriers and ending Japanese hopes of victory in World War II.

The basic lines of the Douglas SBD Dauntless originate with Jack Northrop's series of all-metal, single-engine monoplanes, beginning with the Alpha and continuing on to the BT-1 dive-bomber of 1938. Under Heinemann's eagle eye, a team of Douglas engineers reworked the basic Northrop design when Northrop left to form his own company.

Heinemann, who always sought the simplest, lightest, strongest solution, refined the aircraft in many ways so that ultimately 5,936 were purchased by the U.S. military, primarily the Navy and Marines.

Like all aircraft of the time, the Douglas SBD Dauntless went through successive modifications to reflect wartime needs for armor and armament. Despite being underpowered and unpleasant to fly over long distances, the Dauntless proved itself to be the supreme dive-bomber of the Pacific War, excelling not only at Midway but in countless other engagements. Like the B-17 bomber, it could take tremendous punishment and somehow fly back home.