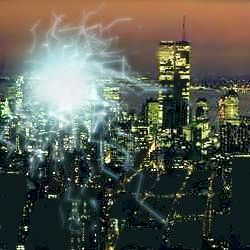 Anyone who's been through a prolonged power outage knows that it's an extremely trying experience. Within an hour of losing electricity, you develop a healthy appreciation of all the electrical devices you rely on in life. A couple hours later, you start pacing around your house. After a few days without lights, electric heat or TV, your stress level shoots through the roof.

But in the grand scheme of things, that's nothing. If an outage hits an entire city, and there aren't adequate emergency resources, people may die from exposure, companies may suffer huge productivity losses and millions of dollars of food may spoil. If a power outage hit on a much larger scale, it could shut down the electronic networks that keep governments and militaries running. We are utterly dependent on power, and when it's gone, things get very bad, very fast.

An electromagnetic bomb, or e-bomb, is a weapon designed to take advantage of this dependency. But instead of simply cutting off power in an area, an e-bomb would actually destroy most machines that use electricity. Generators would be useless, cars wouldn't run, and there would be no chance of making a phone call. In a matter of seconds, a big enough e-bomb could thrust an entire city back 200 years or cripple a military unit.

The U.S. military has been pursuing the idea of an e-bomb for decades, and many believe it now has such a weapon in its arsenal. On the other end of the scale, terrorist groups could be building low-tech e-bombs to inflict massive damage on the United States.

In this edition of HowStuffWorks, we'll examine the basic concept behind e-bombs, and we'll take a look at some major bomb technologies.

The basic idea of an e-bomb -- or more broadly, an electromagnetic pulse (EMP) weapon -- is pretty simple. These sorts of weapons are designed to overwhelm electrical circuitry with an intense electromagnetic field.

If you've read How Radio Works or How Electromagnets Work, then you know an electromagnetic field in itself is nothing special. The radio signals that transmit AM, FM, television and cell phone calls are all electromagnetic energy, as is ordinary light, microwaves and x-rays.

A low intensity radio transmission only induces sufficient electrical current to pass on a signal to a receiver. But if you greatly increased the intensity of the signal (the magnetic field), it would induce a much larger electrical current. A big enough current would fry the semiconductor components in the radio, disintegrating it beyond repair.

Picking up a new radio would be the least of your concerns, of course. The intense fluctuating magnetic field could induce a massive current in just about any other electrically conductive object -- for example phone lines, power lines and even metal pipes. These unintentional antennas would pass the current spike on to any other electrical components down the line (say, a network of computers hooked up to phone lines). A big enough surge could burn out semiconductor devices, melt wiring, fry batteries and even explode transformers.

There are a number of possible ways of generating and "delivering" such a magnetic field. In the next section, we'll look at a few possible EMP weaponry concepts. 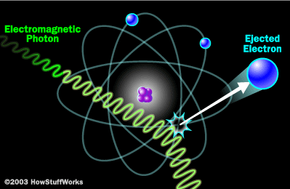 E-bombs started popping up in headlines only recently, but the concept of EMP weaponry has been around for a long time. From the 1960s through the 1980s, the United States was most concerned with the possibility of a nuclear EMP attack.

This idea dates back to nuclear weapons research from the 1950s. In 1958, American tests of hydrogen bombs yielded some surprising results. A test blast over the Pacific Ocean ended up blowing out streetlights in parts of Hawaii, hundreds of miles away. The blast even disrupted radio equipment as far away as Australia.

Researchers concluded that the electrical disturbance was due to the Compton effect, theorized by physicist Arthur Compton in 1925. Compton's assertion was that photons of electromagnetic energy could knock loose electrons from atoms with low atomic numbers. In the 1958 test, researchers concluded, the photons from the blast's intense gamma radiation knocked a large number of electrons free from oxygen and nitrogen atoms in the atmosphere. This flood of electrons interacted with the Earth's magnetic field to create a fluctuating electric current, which induced a powerful magnetic field. The resulting electromagnetic pulse induced intense electrical currents in conductive materials over a wide area.

During the cold war, U.S. intelligence feared the Soviet Union would launch a nuclear missile and detonate it some 30 miles (50 kilometers) above the United States, to achieve the same effect on a larger scale. They feared that the resulting electromagnetic burst would knock out electrical equipment across the United States.

Such an attack (from another nation) is still a possibility, but that is no longer the United States' main concern. These days, U.S. intelligence is giving non-nuclear EMP devices, such as e-bombs, much more attention. These weapons wouldn't affect as wide an area, because they wouldn't blast photons so high above the Earth. But they could be used to create total blackouts on a more local level. 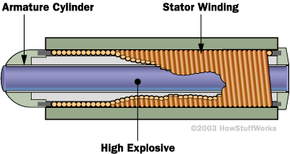 The United States most likely has EMP weapons in its arsenal, but it's not clear in what form. Much of the United States' EMP research has involved high power microwaves (HPMs). Reporters have widely speculated that they do exist and that such weapons could be used in a war with Iraq.

Most likely, the United States' HPM e-bombs aren't really bombs at all. They're probably more like super powerful microwave ovens that can generate a concentrated beam of microwave energy. One possibility is the HPM device would be mounted to a cruise missile, disrupting ground targets from above.

This technology is advanced and expensive and so would be inaccessible to military forces without considerable resources. But that's only one piece of the e-bomb story. Using inexpensive supplies and rudimentary engineering knowledge, a terrorist organization could easily construct a dangerous e-bomb device.

In late September 2001, Popular Mechanics published an article outlining this possibility. The article focused on flux compression generator bombs (FCGs), which date back to the 1950s. This sort of e-bomb has a fairly simple, potentially inexpensive design, illustrated below. (This conceptual bomb design comes from this report written by Carlo Kopp, a defense analyst. The design concept has been widely available to the public for some time. Nobody would be able to construct a functioning e-bomb from this description alone).

Here's the sequence of events when the bomb goes off:

Most likely, this type of weapon would affect a relatively small area -- nothing on the order of a nuclear EMP attack -- but it could do some serious damage.

In the next section, we'll look at some possible effects of an EMP attack.

The United States is drawn to EMP technology because it is potentially non-lethal, but is still highly destructive. An E-bomb attack would leave buildings standing and spare lives, but it could destroy a sizeable military.

In modern warfare, the various levels of attack could accomplish a number of important combat missions without racking up many casualties. For example, an e-bomb could effectively neutralize:

EMP weapons could be especially useful in an invasion of Iraq, because a pulse might effectively neutralize underground bunkers. Most of Iraq's underground bunkers are hard to reach with conventional bombs and missiles. A nuclear blast could effectively demolish many of these bunkers, but this would take a devastating toll on surrounding areas. An electromagnetic pulse could pass through the ground, knocking out the bunker's lights, ventilation systems, communications -- even electric doors. The bunker would be completely uninhabitable.

U.S. forces are also highly vulnerable to EMP attack, however. In recent years, the U.S. military has added sophisticated electronics to the full range of its arsenal. This electronic technology is largely built around consumer-grade semiconductor devices, which are highly sensitive to any power surge. More rudimentary vacuum tube technology would actually stand a better chance of surviving an e-bomb attack.

A widespread EMP attack in any country would compromise a military's ability to organize itself. Ground troops might have perfectly functioning non-electric weapons (like machine guns), but they wouldn't have the equipment to plan an attack or locate the enemy. Effectively, an EMP attack could reduce any military unit into a guerilla-type army.

While EMP weapons are generally considered non-lethal, they could easily kill people if they were directed towards particular targets. If an EMP knocked out a hospital's electricity, for example, any patient on life support would die immediately. An EMP weapon could also neutralize vehicles, including aircraft, causing catastrophic accidents.

In the end, the most far-reaching effect of an e-bomb could be psychological. A full-scale EMP attack in a developed country would instantly bring modern life to a screeching halt. There would be plenty of survivors, but they would find themselves in a very different world.

For more information about e-bombs and other EMP weapons, check out the links on the next page.