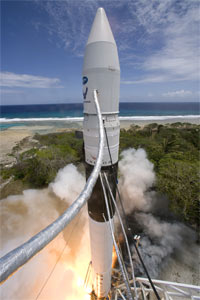 SpaceX's first launching vehicle model, called the Falcon 1, is a two-stage rocket. Space-faring rockets use multiple stages in order to boost themselves into high altitude. A rocket changes stages when expendable engines burn up all of their fuel and drop off the spaceship. That leaves the other engines to keep the rocket going. This process is necessary because it takes a lot of fuel to launch a rocket, and letting go of used, empty vessels rids the vessel of excess weight. The NASA space shuttle also sheds its solid rocket boosters during flight. Also, keeping the Falcon launches down to two stages minimizes the potential for damage that can occur during separation.

SpaceX's first attempts at launches used the Falcon 1, which uses one engine per stage, the Merlin engine and the Kestrel Engine, both designed by SpaceX. The Merlin engine, which powers the first stage, originally used an ablative cooling method, meaning that the engine has a protective coating that breaks away as it absorbs heat. But after this method proved problematic, Musk changed the Merlin to include a regenerative-cooling method, which is a common cooling process that runs a special coolant through the engine to relieve it of some heat using convection. This heated coolant then works as a propellant for the engine. SpaceX designed the first stage section of the rocket to fall to water with parachutes. That way the rocket is reusable, which makes multiple launches significantly less expensive.

The second stage (also known as the upper stage) employs a Kestrel engine, which is cooled with both ablative material and a radiative-cooling method. Applied primarily for low-thrust engines, radiative cooling uses walls that sustain high temperatures. The heat it absorbs then gets radiated off into the rocket's exhaust.

The Falcon 1 burns liquid oxygen and a special grade of kerosene to achieve thrust. The main structure is made of aluminum alloy. It also incorporates a common bulkhead, which is a shared wall between the fuel and the oxidizer in the rocket. This insulated wall keeps the two chambers at different temperatures but consolidates materials, which makes the rocket lighter. Before liftoff, the rocket is actually held in place for a period after the engines start as engineers make sure the systems are running properly. This process is common for commercial airplanes, but less so for rocket launches.

In March 2006, Musk and his SpaceX launched the maiden flight of Falcon 1. The rocket was carrying an experimental satellite that cadets from the U.S. Air Force Academy constructed. Unfortunately, having already experienced several delays, the Falcon 1 failed 29 seconds after liftoff, still in its first stage. The Falcon 1's main engine caught fire [source: Berger]. The Falcon 1 was launched again in March 2007, and this time it performed significantly better. But ultimately it failed to reach orbit. An engine failed 90 seconds too soon, and the rocket only achieved an altitude of 180 miles (290 km) [source: SpaceX]. Heavy vibrations caused the fuel to slosh around and the rocket to waver and fall [source: Chafkin].

Despite these failures, Musk plans to keep trying with the Falcon 1, and with a slightly altered version, the Falcon 1e, to be finished in 2010. Meanwhile, SpaceX is already at work designing another model of Falcon rockets, the Falcon 9, which we'll talk about next.