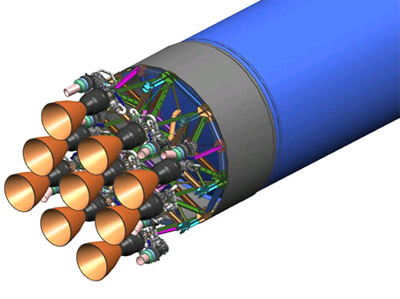 Close up of the nine engines on Falcon 9.
Space Exploration Technologies Corporation

The Falcon 9, the next SpaceX Falcon, is also a two-stage rocket. But the Falcon 9 is much larger than the Falcon 1. In fact, it's so much larger, it uses nine Merlin engines for its first stage instead of one, like its predecessor. Using nine engines for the first stage allows SpaceX to live up to its promises of reliability. If at any time an engine failure occurs, the other working engines can easily and safely pick up the slack [source: SpaceX].

The second stage only uses one engine. And, unlike the Falcon 1, its second stage uses a Merlin engine, not a Kestrel. The Kestrel doesn't achieve as high a specific impulse (a measure of thrust) as the Merlin. In fact, Musk claims that the Merlin can achieve higher performance than any other gas-generator cycle kerosene engine ever built [source: SpaceX].

Using Merlin engines allows SpaceX to cut costs, which, next to reliability, is a high priority for Musk [source: Foust]. The Falcon 1 has a reusable first stage, but both stages on the Falcon 9 rocket are fully reusable. Another cost-saving technique SpaceX employs on the Falcon 9 is to use much of the same materials for the second stage structure as it does on the first stage structure. Using the same material means, for instance, that it uses the same methods to manufacture and that there's no need to buy new tools [source: SpaceX].

To give you an idea of how large Falcon 9 is, here's a shot of the quarter section of the Falcon 9 fairing at SpaceX's Hawthorne, Calif., headquarters.
Space Exploration Technologies Corporation

As with Falcon 1, the Falcon 9 also is held down after the engines start to allow SpaceX to verify that the systems are working properly. But the Falcon 9 has another safety feature that distinguishes it from Falcon 1: Kevlar shields on the engines that protect them from damaging debris.

SpaceX has also started to build a structure it calls the Falcon 9 Heavy. As the name indicates, it's a larger structure than the normal Falcon 9. It's larger so that it can carry heavy payloads into space. The Falcon 9 Heavy is simply a Falcon 9 with two more Falcon 9 stages strapped on either side of it. Each of the strapped-on rockets has nine engines. These extra 18 engines work together as boosters to accommodate a heavy payload. SpaceX hopes to have this structure up and running by 2010.

So far we've only been talking about the launching vehicles, but for SpaceX to send humans into space, it will need the Dragon, which we'll talk about next.