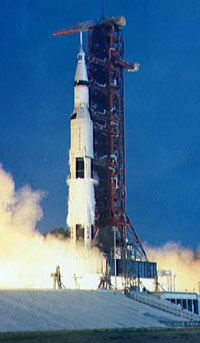 Elon Musk started SpaceX in 2002 with comparatively little background in rocket science. For only having an undergraduate degree in physics and keen business sense, he's got inspiring confidence. In an audacious move, he has hired professional engineers to build rockets from the ground up instead of buying rockets from other, established rocket-building companies. And these rockets, he hopes, will take payloads and humans to Earth orbit and beyond.

Before we delve into his SpaceX rockets, we'll need some generalized education on rockets. If you've read How Rocket Engines Work, you know that the rocket's get-up-and-go revolves around the same principle that thrusts a burst balloon. In essence, the rocket (and the balloon) throw force one way in order to move them the opposite way. The air in a burst balloon quickly escapes through its hole, propelling the balloon in the opposite direction. In the same way, a rocket moves up by burning fuel and sending the exhaust through a downward-facing nozzle. This kind of thrust means that a rocket can move through the air as well as the vacuum of space. Space-faring vehicles rely on very powerful rockets to break through the Earth's atmosphere.

Although the concept of rockets is simple enough, the process of making a safe and reliable rocket is a bit more complicated. NASA has spent billions of dollars and several decades trying to perfect rocket science, and mistakes still happen.

­But Elon Musk, who wasn't even alive when the first man walked on the moon, is frustrated with how long it's taking space exploration to achieve another major milestone. He's also just as frustrated with how much money NASA spends on the space program. Business sense dictates that the costs of space exploration would have decreased in the decades succeeding the Apollo moon landing. That hasn't been the case, however, and Musk thinks inefficiency is to blame.

NASA, he claims, spends an inordinate amount of money for only slightly better performance [source: Hoffman]. Musk believes private companies, instead, must improve the reliability of space exploration and keep the costs low. For those who balk at this goal, he argues that better performance does not equal reliability -- an expensive Ferrari can be unreliable while a cheap Honda can be very reliable [source: Reingold].

Although Musk is known to be a stern boss, he's far from a heartless mercenary; he claims he's doing all this to save the world. Fearing the end of natural resources on Earth, Musk believes it's paramount to work toward colonizing Mars. He believes his SpaceX organization can send reliable rockets into space for much less money than NASA spends. Musk has said he aspires to be the "Southwest Airlines of space" in terms of low-cost human travel [source: Foust].

Before he can send people to Mars, however, he'll need to get his rockets into orbit. Next, we'll take a look at the Musk's Falcon rockets.

Take that Cash with Both Hands

Elon Musk is a Trustee for the X PRIZE Foundation, a group that offers prizes, such as the Google Lunar X PRIZE, to private organizations that accomplish great feats in space. Musk has even offered competing companies discounted prices to hitch a ride on a launch of his Falcon rockets [source: Cingely]