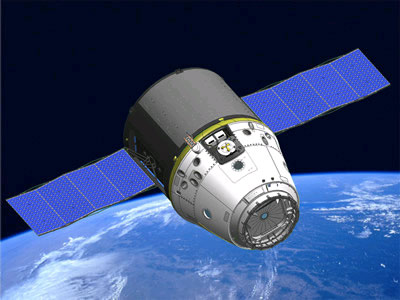 Whoever heard of a falcon carrying a dragon? It's a scenario that could only come out of Elon Musk's imagination, and he's making it happen. SpaceX's spaceship, called the Dragon, will launch on the Falcon 9 to carry cargo and crew into space.

An unpressurized section or "trunk" will house cargo that doesn't need to be pressurized during flight. When the Dragon is equipped for human transport, it will include controls that will allow the crew to take over the ship, as well as an escape system and a life support system. The design allows room for seven on board crew members.

During re-entry to the Earth's atmosphere, the Dragon will benefit from an ablative covering and heat shield to allow it to sustain high temperatures. Specifically, the material is known as Phenolic Impregnated Carbon Ablator (PICA), an extremely heat-resistant material developed by NASA [source: Musk]. The systems can then steer the ship toward a water landing, aided by parachutes. Finally, ships come to pick up the Dragon and its crew.

One thing that's helping to speed along the development of the Dragon is SpaceX's partnership with NASA. When NASA retires the Space Shuttle in 2010, it won't be sending missions up to the International Space Station (ISS) for five years. So NASA has been reaching out to private U.S. space organizations to use the ISS in its absence. NASA hopes SpaceX's Falcon 9 and Dragon will put the U.S. in the ISS.

NASA gave Musk's company an indefinite delivery/indefinite quantity (IDIQ) contract, which means that NASA will wait to specify exactly what SpaceX's mission is, or even how many missions it will do. But what they do know is that the contract could total up to $1 billion. Although SpaceX plans on providing the Dragon for a cargo flight in 2010, Musk hopes to provide both cargo and crew on the Dragon to the ISS eventually [source: Morris].

So, it seems, despite setbacks, both Musk and NASA are confident SpaceX ships will make it into orbit. Only time will tell if Musk can colonize Mars. Until then, take a look at the outer space articles listed below.