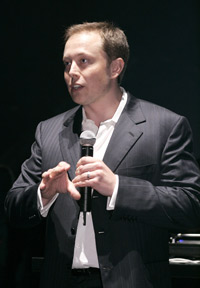 After ditching the Stanford program, Elon Musk broke onto the Internet scene. He devoted the next four years to a company he started, Zip2. Zip2 enabled companies to post content on the Internet, such as maps and directory listings. With an investment deal, Musk gave up much of his control of the company. But he made out like a bandit when Compaq bought Zip2 for $307 million (in cash), which was the biggest sum paid for an Internet company up to that time. Musk walked away from Zip2 with $22 million at 28 years old [source: Watson].

But his Internet energy was far from sapped. Next, he founded a company called X.com, which offered online financial services. Eventually, X.com merged with another company, Confinity, which had developed a service you've probably heard of -- PayPal. PayPal provided customers with easy and secure payment transactions over the Internet. Musk came out ahead again when eBay bought PayPal for $1.5 billion in 2002 [source: Watson].

After eBay took over PayPal, Musk left the Internet behind, bored with the challenge. He then turned to three other ventures: Tesla Motors, SolarCity and, the most ambitious of all, SpaceX.

­The Tesla Motors venture centered on the development of an environmentally friendly sports car, the Tesla Roadster, which has challenged people's conceptions about electric cars. The car charges overnight, uses no gasoline, and Tesla claims it goes from zero to 60 mph (96 kph) in less than 4 seconds.

He has even used SolarCity to mount solar arrays on the roof of a facility for SpaceX, his commercial space company. He hopes SpaceX will reduce the cost and increase the reliability of space travel by a factor of ten. Next, we'll talk about how he plans on accomplish this goal.