by Patrick J. Kiger Apr 27, 2016
The T3 Minneapolis building in Minneapolis, Minnesota, will be the first tall wooden building in the country; construction's expected to be completed by the end of 2016. Image provided by MGA

Back in 1889, Chicago's 10-story Rand McNally Building became the world's first all-steel-framed skyscraper, ushering in an age in which metal, glass and concrete towers would dominate the skylines of major cities. Since then, those sturdy, versatile materials have allowed builders to create scores of spectacular structures.

But the use of those materials has come at a cost to the environment, because making and transporting them generates an enormous amount of carbon emissions — as much as 30 percent of the pollution that's contributing to rising global temperatures and climate change. And the proliferation of those man-made materials can give urban environments what some see as an unnatural, almost alienating ambiance.

That's why some unconventional architects are eager to forsake concrete and steel and turn to an abundant, versatile and renewable material that actually stores carbon instead of causing its release. And it's about as natural as you can get. We're talking about good old-fashioned wood.

Material of the Past ... and Future?

While wood is often used in houses and other smaller-scale structures these days, the idea of building an all-timber skyscraper might seem as outlandish as, well, that episode of "Futurama" in which the robot Bender replaced all his metal parts with wood.

But we kid you not. In 2015, construction began on an 18-story residential tower for student housing at the University of British Columbia. The structure, which incorporates a timber superstructure atop a concrete base, is scheduled for completion in 2017. And Skidmore, Owings & Merrill, the global design firm that created Chicago's iconic Sears (now Willis) Tower, has developed a plan for building a 42-story apartment tower out of wood. Meanwhile Cambridge University's Department of Architecture designers recently presented London mayor Boris Johnson with a design for an 80-story wooden high-rise.

"Wood, unlike steel and concrete, sequesters carbon dioxide, storing it away for the life of the building it is in," Green, who gave a 2013 TED talk on wood skyscrapers (watch the full video below), explained via email. "One cubic meter of wood stores a ton of carbon dioxide. Wood is the only major building material we can build with that is grown by the sun. Its strength-to-weight is phenomenal, and man-made energy is only used to handle it and move it to site."

Since deforestation is also a serious environmental problem, Green would use sustainably-harvested timber, from young trees that can quickly be regrown. That way, producing the resource actually helps take carbon out of the atmosphere, rather than spewing more CO2 during the manufacturing process. (Transporting the wood to construction sites will still burn some fossil fuels and create emissions — at least until we develop solar-powered big rigs.)

And the wood that today's architects would use isn't necessarily the same wood that went into your great-grandparents' barn. Green plans to rely upon "engineered" wood, in which more modest-sized pieces from smaller, younger trees are glued together to form bigger wood panels and beams. Additionally, he's also researching the possibility of processing wood fibers and using 3-D printing to make structural materials.

The 35-story Baobob skyscraper would be the world's tallest wooden building if built in Paris as proposed by architecture firm Michael Green Architecture.
Image provided by MGA

"One of the big advantages we see with mass timber is faster construction timelines," Green says. "These large wood panels can be prefabricated off-site and cut with an extremely high level of precision. They can then be quickly assembled and installed on-site. Dry construction also means we don't need to wait for concrete to cure before we continue on with other aspects of the building."

You might think that wood would also have some major drawbacks, such as flammability, and that it's not as sturdy as steel and concrete. But according to Green, wood panels can be designed to be fire-resistant. And wood's relative lightness — a wooden building would weigh as little as one-sixth the weight of a concrete and steel structure — and flexibility actually would make it more resilient against earthquakes.

Even so, wooden skyscrapers have a way to go before the idea is widely accepted

"One of the biggest challenges of building tall with wood is that building codes around the world still have to change and adapt to these new ways of building," explains Green. "Convincing authorities to adopt new building codes and methods is less of a technical challenge and more of a challenge of perception and political will. We feel we have an important role as architects to help shift misconceptions about building with wood and help other architects, engineers, and private developers recognize the value of mass timber design as an alternative to steel and concrete."

Now That's Interesting
Austrian architects have calculated that building a 276-foot-tall (86-meters-tall) apartment building mostly out of wood instead of concrete would save nearly 2,800 ton of carbon emissions — roughly equivalent of the amount emitted if you drove a car 25 miles a day for 1,300 years.

Parents: Ditch the Spanking and Try Non-punitive Discipline Instead

Can Jet Hand Dryers Really Blast Out a Germ Cloud? Well, Yes and No 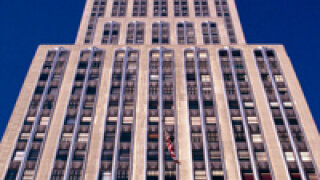 Toyota's Newest Electric Concept Car Is Made of Wood