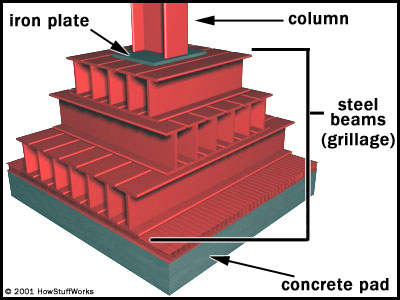 The pieces of a skyscraper's spread footing

Click "Build" to see how the parts of a skyscraper work together.

The central support structure of a skyscraper is its steel skeleton. Metal beams are riveted end to end to form vertical columns. At each floor level, these vertical columns are connected to horizontal girder beams. Many buildings also have diagonal beams running between the girders, for extra structural support.

In this giant three-dimensional grid -- called the super structure -- all the weight in the building gets transferred directly to the vertical columns. This concentrates the downward force caused by gravity into the relatively small areas where the columns rest at the building's base. This concentrated force is then spread out in the substructure under the building.

In a typical skyscraper substructure, each vertical column sits on a spread footing. The column rests directly on a cast-iron plate, which sits on top of a grillage. The grillage is basically a stack of horizontal steel beams, lined side-by-side in two or more layers (see diagram, below). The grillage rests on a thick concrete pad poured directly onto the hard clay under the ground. Once the steel is in place, the entire structure is covered with concrete.

This structure expands out lower in the ground, the same way a pyramid expands out as you go down. This distributes the concentrated weight from the columns over a wide surface. Ultimately, the entire weight of the building rests directly on the hard clay material under the earth. In very heavy buildings, the base of the spread footings rest on massive concrete piers that extend all the way down to the earth's bedrock layer.

One major advantage of the steel skeleton structure is that the outer walls -- called the curtain wall -- need only to support their own weight. This lets architects open the building up as much as they want, in stark contrast to the thick walls in traditional building construction. In many skyscrapers, especially ones built in the 1950s and '60s, the curtain walls are made almost entirely of glass, giving the occupants a spectacular view of their city.