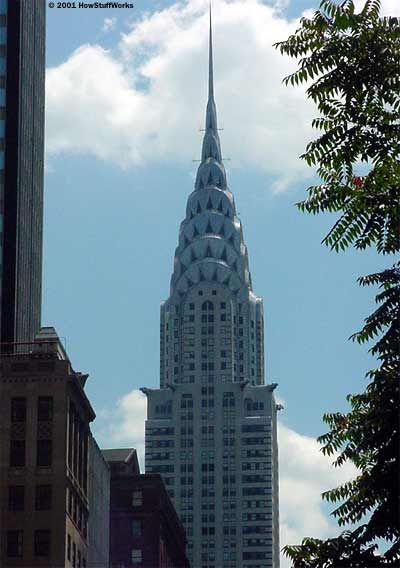 In addition to the vertical force of gravity, skyscrapers also have to deal with the horizontal force of wind. Most skyscrapers can easily move several feet in either direction, like a swaying tree, without damaging their structural integrity. The main problem with this horizontal movement is how it affects the people inside. If the building moves a substantial horizontal distance, the occupants will definitely feel it.

The most basic method for controlling horizontal sway is to simply tighten up the structure. At the point where the horizontal girders attach to the vertical column, the construction crew bolts and welds them on the top and bottom, as well as the side. This makes the entire steel super structure move more as one unit, like a pole, as opposed to a flexible skeleton.

For taller skyscrapers, tighter connections don't really do the trick. To keep these buildings from swaying heavily, engineers have to construct especially strong cores through the center of the building. In the Empire State Building, the Chrysler Building and other skyscrapers from that era, the area around the central elevator shafts is fortified by a sturdy steel truss, braced with diagonal beams. Most recent buildings have one or more concrete cores built into the center of the building.

Making buildings more rigid also braces them against earthquake damage. Basically, the entire building moves with the horizontal vibrations of the earth, so the steel skeleton isn't twisted and strained. While this helps protect the structure of the skyscraper, it can be pretty rough on the occupants, and it can also cause a lot of damage to loose furniture and equipment. Several companies are developing new technology that will counteract the horizontal movement to dampen the force of vibration. To learn more about these systems, check out How Smart Structures Will Work.

Some buildings already use advanced wind-compensating dampers. The Citicorp Center in New York, for example, uses a tuned mass damper. In this complex system, oil hydraulic systems push a 400-ton concrete weight back and forth on one of the top floors, shifting the weight of the entire building from side to side. A sophisticated computer system carefully monitors how the wind is shifting the building and moves the weight accordingly. Some similar systems shift the building's weight based on the movement of giant pendulums.