by Nathan Chandler Jan 31, 2019
This photo of Nikola Tesla's Wardenclyffe Tower was taken in 1904 and bears a striking resemblance to Viziv's wireless tower built in 2018. Marc Seifer Archives/Wikimedia Commons

Late in 2018, Viziv Technologies (formerly Texzon) completed a tower off of I-35 near Milford, Texas. With its lattice-style structural supports and bulbous top, it bears a distinct resemblance to Nikola Tesla's Wardenclyffe Tower (or Tesla Tower), an ill-fated power project envisioned by the famous physicist-engineer in the early 20th century. The tower was meant to provide free energy all over Earth using wireless technology, but instead wound up scrapped by creditors after Tesla couldn't pay the mortgage on the property.

Viziv's vision statement, rendered in all-caps on its website, is to "POWER THE PLANET AND BRING LIGHT TO THE WORLD," indicating that its primary goal is indeed power-related, offering up electricity without traditional infrastructure, as part of a partnership with Baylor University. If it's anything like Tesla's system, it could also offer new ways to send signals for radio communications and global positioning systems. And it could bring electricity to the 1.3 billion people worldwide who don't have it and don't have the infrastructure to get it.

According to company literature, the endeavor relies heavily on what are called Zenneck surface waves. These waves, named for Jonathan Zenneck (a 20th century physicist and electrical engineer), are electromagnetic waves that harness Earth's surface as a sort of "waveguide" or conduit for electricity and communications signals, so powerful that they envelop the entire planet without the need for wires.

Unlike so many types of other transmissions, Zenneck waves don't suffer degradation from challenges like solar flares, lightning or even electromagnetic pulses, the kind you might see in the event of, say, a nuclear bomb blast.

Sounds like a fairly straightforward corporate experiment so far, right? Set up power transmitters in one location and then the receivers in another. Tweak the variables a bit and then determine if you can make your theories work in real-world conditions.

The thing is, when it comes to Nikola Tesla's legacy, nothing is simple. His legend is fertile ground not only for real, modern science, but also for conspiracy theories of all kinds.

Down the rabbit hole we go. Let's review:

In 1943, Tesla, a brilliant, possibly mentally-ill scientist died at his hotel. U.S. officials immediately seized the scientist's research, partly in hopes of finding plans for a secret "death ray" particle beam weapon (and of course, also to prevent Axis spies from getting their hands on any useful scientific revelations).

Hundreds of pages of those documents were subsequently classified and went "missing." It wasn't until 2016 that a Freedom of Information Act forced authorities to unveil some of those papers.

It's possible that Tesla's Wardenclyffe Tower had potential applications in some sort of particle ray weapon. Hence, the classified files. Some have even taken to calling the device a "peace ray," a kind of defense system that the war-hating Tesla created to prevent countries from attacking each other – a powerful, invisible "wall of force" that would keep enemies at bay without resorting to the violence of bullets and bombs.

Conspiracists pounced on the fact that two of Viziv Technologies' top leaders are ex-military types with histories in ballistic missile defense. This, at a time when the U.S. commander-in-chief is speaking about a space-based missile defense system. Milford, Texas residents wondered about the tower's purpose. “We aren’t really sure. We’re thinking we’re going to walk around with tinfoil on our heads,” resident Lauren Gray told TV station KXXV in October 2018.

Michael Taylor, vice president of communications at Viziv Technologies, explained in an email what the purpose of the tower was.

“The tower at our facility in Milford will allow us to advance the engineering of our surface wave structures at a much larger scale than we have to date,” Taylor said. “Our testing will soon be underway and we hope to have results to share with the world in the next 12 to 18 months. Showing a signal was sent and received globally, utilizing the Zenneck wave, is our primary goal at this time.”

Taylor noted that Viziv was working to commercialize its wireless surface wave technology, which he said would have long-term benefits for industries including communications, energy delivery and global positioning. He acknowledged that the Viziv tower did look similar to the Wardenclyffe structure and that both Tesla and Viziv were involved in wireless electricity.

“As with all scientific advancement, our work would not be possible without the pioneering efforts of the scientists and engineers that came before us. While it’s flattering to be compared to a visionary like Tesla, Viziv’s engineering team has the advantage of modern computer modeling, more precise instrumentation, and a hundred years of scientific advancement. We are just blessed to possess the right tools at the right time for this particular breakthrough,” Taylor said.

This story was updated to include comments from Michael Taylor at Viziv Technologies provided after original publication.

Now That's Very Interesting
When Tesla died in 1943, U.S. authorities snapped up his research. Then, they called in a well-regarded electrical engineer from MIT to sift through the papers and note anything useful. That engineer's name? It was Dr. John G. Trump, uncle to President Donald Trump. After evaluating Tesla's work, John Trump scoffed at many of the genius's ideas as "speculative." But why then were these documents classified for so long? And is it just a coincidence that Viziv's tower was constructed after a Trump family member was elected to office? Conspiracy theorists want to know.

What's Up With the Millennial Pout? 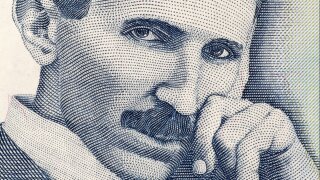 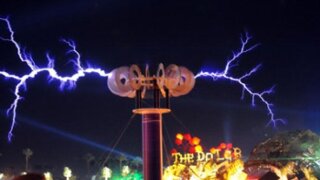 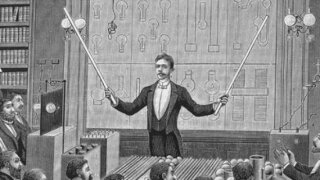