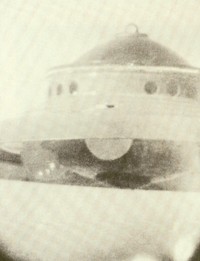 While Otis Carr was working on his spaceship, George Adamski photographed this Venusian "scoutship" -- in actuality a small model patterned after a craft proposed by space-travel theorist Mason Rose -- at his Palomar Garden, California, home on December 13, 1952.
Intercontinental U.F.O. Galactic Spacecraft Research and Analytic Network Archives

To hear him tell it, Otis T. Carr was the smartest man since Isaac Newton, Albert Einstein, and Nikola Tesla. Not only that but Tesla, the great electricity genius and Thomas Edison contemporary, had confided some of his deepest secrets to Carr when the latter worked as a young hotel clerk in New York City in the 1920s.

­In the mid-1950s, with Tesla long gone, Carr was ready to tell the world and collect the rewards. He founded OTC Enterprises, hired a fast-talking business manager named Norman Colton, and set out to secure funding for a "fourth dimensional space vehicle" powered by a "revolutionary Utron Electric Accumulator." The saucer-shaped OTC-X1 would undergo its first flight in April 1959 and the following December go on all the way to the moon.

Carr and Colton secured hundreds of thousands of dollars from wealthy investors and contactee-oriented saucer fans, including Warren Goetz, who claimed to be an actual space person, having materialized as a baby in his (Earth) mother's arms while a saucer hovered overhead. Another associate, Margaret Storm, wrote a biography of Tesla, who turns out to have been a Venusian. To skeptics Carr was a shameless spouter of double-talk and baffle-gab. As one observer put it, "For all most people know, he might well be a great scientist. After all, he is completely unintelligible, isn't he?"

On Sunday, April 19, 1959, while crowds gathered at an amusement park in Oklahoma City to watch the OTC-X1's maiden flight, Carr suddenly contracted a mysterious illness and had to be hospitalized. He mumbled something about a "mercury leak," but burly guards kept reporters who wanted to check for themselves out of the plant where the craft supposedly was being constructed. One who managed to catch a glimpse saw only a jumble of disconnected wires and parts-nothing that looked remotely like a functioning aircraft.

The OTC-X1 never went to the moon, but Carr went to prison for selling stock illegally. He died penniless years later in a Pittsburgh slum. Colton, who had skipped out of Oklahoma a step ahead of the authorities, formed the Millennium Agency, which sold stock in machines "operated entirely by environmental gravitic forces." They never flew either.

Could a gamma-ray burst wipe out all life on Earth?
Just Four Dimensions in the Universe, if You Believe Gravitational Waves
Total Solar Eclipse on Aug. 21, 2017: When, Where and How to See It