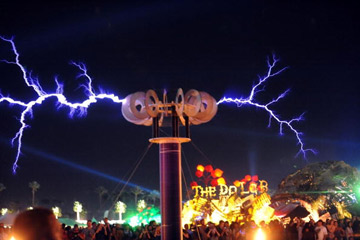 Who is Nikola Tesla? He has an electric car company and a rock band named after him. Legendary rock musician David Bowie even played the eccentric scientist in the 2006 movie "The Prestige". Tesla had hundreds of patents registered in his name -- yet he never won a Nobel Prize for his lifelong work with electricity. The inventions and discoveries he made over his lifetime, particularly in the late 1800s, are the basis for much of our modern lifestyle. Let's take a look at his most famous and influential works.

Tesla built on these discoveries and inventions to create the first wireless remote control boat, fluorescent and neon lights (which he did indeed bend into letters), wireless bulbs that were lit by energy from the earth and an AC power plant that harnessed the hydroelectric power of Niagara Falls. He even had a hand in the creation of robotics. His system of delivering power to homes and businesses using AC eclipsed the DC power advocated by his former employer Thomas Edison. (We still receive AC power in our homes today.) By the time Tesla died in 1943, his money and fame were on the wane, but his inventions and discoveries have made much of our current technology possible.