by Terri Briseno
Prev NEXT
4 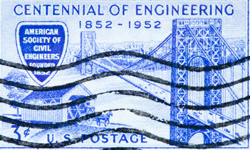 Seventy-five years after the society got its start, Eaves became the first female member.
iStockphoto/Thinkstock

Engineers need to have a high aptitude for numbers and mathematical reasoning, and Elsie Eaves (1898-1983) had that plus tremendous skill at building databases -- without the aid of computers. Eaves earned a degree in civil engineering in 1920 from the University of Colorado and worked in highway, railway and public roads engineering, but her main distinction may be in the area of data collecting and reporting. In 1926, Eaves started working for Engineering News-Record, and with a team of reporters nationwide, she tracked trends and spending in construction and chronicled business activities so well that she was later tasked with consulting on reports for governmental and municipal planning for urban housing, new construction and industrial sewage practices.

Her construction inventories became so well-known and respected that they became databases for other researchers, including those who needed supporting figures to drive new construction after the Great Depression. Eaves was voted in as the first female member -- and later, as a life member -- of the American Society of Civil Engineers (ASCE) [sources: Engineer Girl; University of Colorado at Boulder].