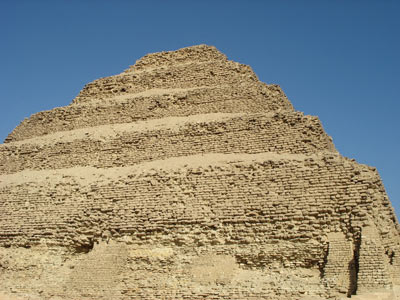 The first stepped pyramid in Egypt, in Saqqara, was completed in 2620 B.C. for the Third Dynasty Egyptian pharaoh Djoser. It had six levels and an underground burial chamber. Builders later attempted, but never finished, another six-level stepped pyramid.

The Egyptians continued to construct taller and taller pyramids and started smoothing out the jagged edges of stepped pyramids. One of the earliest attempts was the Meidum pyramid, in 2570 B.C. It had seven steps progressing to eight, but it collapsed and was abandoned.

Pyramid designers learned that if pyramids were going to be higher and have steeper slopes, their bases needed to be wider. At Dahshur, further upstream along the Nile from Saqqara, laborers started the construction of a pyramid for the Fourth Dynasty pharaoh Sneferu. Unfortunately, the designers chose a poor foundation, and the pyramid began to lean inward upon itself when it was about two-thirds complete. The builders reduced the angle of the upper portion to complete it and make it more stable, and it is now known as the Bent Pyramid (2565 B.C.).

Unsatisfied with the Bent Pyramid, Sneferu ordered another pyramid at Dahshur. The designers chose a better foundation and made this pyramid the same height as the Bent Pyramid, but with a wider base and a shallower angle. The Red Pyramid was completed in 2560 B.C.

Pyramid construction reached its apex with the Great Pyramid of Khufu. We'll learn all about it on the next page.