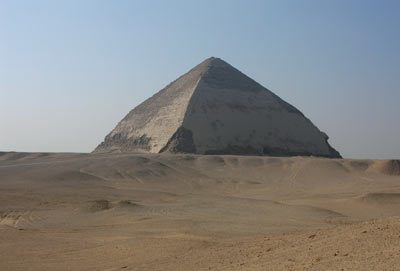 The pyramids were built of limestone, granite, basalt, gypsum (mortar), and baked mud bricks. Limestone blocks were quarried at Giza and possibly other sites. Granite likely came from upriver at Aswan. Alabaster came from Luxor and basalt from the Fayoum depression.

Iron tools were not available, so workers used copper and stone-cutting tools to carve out the blocks in the quarries. They then used levers to move the stone blocks away from the quarry site.

Again, no one knows how laborers were able to get the 2.5-ton stone blocks from the quarries to the building site. Wheels wouldn't have been useful on the desert sand and gravel, so they most likely dragged the blocks with wooden sleds and ropes. Some think that workers used quarter-circle wooden sleds that fit around a rectangular block. They attached the sleds to the block, and a crew of about eight men rolled them along the ground, much like rolling a keg of beer. Others say the laborers used wooden rollers.

For long-distance transport, the blocks were loaded on barges and transported down the Nile. Workers dug canals to get the barges nearer to the site.

Egyptologists estimate that workers placed­ about 300 stones a day during pyramid construction. Several theories -- lever systems, ramps and kites, for example -- attempt to explain how the huge blocks got into place. Those in the know generally accept the ­ramp idea, but they debate the exact ramp configurations. The ramps could have been long and straight, perpendicular to the sides or wrapped around the core.

While laborers placed stones in the core, stone cutters were making the chambers, passageways and shafts in the pyramid's interior. Artists inscribed the designs that adorned the chamber walls. Let's take a closer look at the workers who built the pyramids.

There are a few striking examples of modern pyramids. The glass and steel pyramids in the courtyard of the Louvre in Paris (above), were designed by architect I.M. Pei in 1989. The 48-story Transamerica Pyramid in San Francisco was finished in 1972. The Luxor Hotel and Casino in Las Vegas, was built in the shape of a pyramid with a replica of the Sphinx in front of it. It is now undergoing a makeover to eliminate the ancient Egyptian theme.