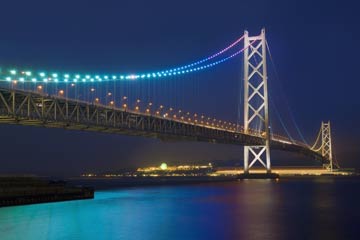 The Akashi Strait Bridge in Kyoto, Japan is the longest suspension bridge in the world. See other pictures of bridges.
© Robert Essel/Corbis

In the hour after sunrise, the docks bordering the Akashi Strait were quiet but for the sounds of sea traffic. On this particular morning, however, an unfamiliar noise soon broke the thick fog and added to the growing din: Scores of schoolchildren bounding toward the Shiun Maru ferry, waiting to carry them across the 4-kilometer (2.4-mile) strait carved between mainland Japan and Awaji, an island to the south.

The May 11, 1955, field trip would offer students a closer look at Awaji's rural lifestyle, including fishing villages and incense exports that would have seemed a world away from their bustling surroundings in the Hiroshima, Shimane, Ehime and Kochi prefectures.

A 45-minute journey by boat was the only way to reach the island but required navigation of Japan's busiest shipping lane, where more than 1,400 vessels passed each day. Just as eager hands gripped deck railings and excited eyes watched for a distant shore, a shape loomed out of the fog. With little warning, the Shiun Maru collided with a cargo ship.

Many of the ferry's passengers were thrown into frigid water and drowned. Within minutes, those still clinging to the ferry's listing decks sank with the Shiun Maru. As rescue turned to recovery, a staggering death toll emerged: 168 passengers, including 100 schoolchildren, had perished [source: Japan Times].

The sinking of the Shiun Maru left widespread public outrage in its wake, spurring progress on a concept that had long been considered: a motor vehicle bridge to connect Akashi, just west of Kobe, to the island of Awaji.

The Japanese government knew the structure would need to be a suspension bridge. This type of bridge features a roadway suspended by cables hanging from support towers and, notably, requires only a few columns to anchor it to the earth. This was an important consideration, considering the Akashi Strait bridge would span a busy shipping lane. The six-lane suspension bridge was an elegant, expensive and -- at nearly 4 kilometers (2.4 miles) long -- potentially impossible solution [sources: Cooper, Curiosity Aroused, National Geographic, PBS, Ryan, Usman].

The Bridge That Ingenuity Built

At face value, constructing a suspension bridge to span the Akashi Strait was a no-brainer. Not only would the bridge allow motor vehicle traffic to run between Japan and neighboring Awaji Island for the first time, but Awaji would no longer be the only major island disconnected from the Japanese mainland. Plus, a massive suspension bridge would serve as a testament to Japanese engineering.

There was just one problem: The Akashi Strait was one of the worst places in the world to build a bridge. Few bridge builders wished to master this particular spot because of its strong currents, dense fog and frequent storms that sank hundreds of ships each year. Typhoon winds often ripped through the corridor at more than 280 kilometers (180 miles) an hour. And if that wasn't enough, the strait ran along a major earthquake fault.

Oh, and there was one other pesky issue to consider. No one had ever built a suspension bridge in such cavernous water (the Akashi Strait measured 110 meters -- the equivalent of 360 feet -- deep) or at such an extended length. At its longest point, the bridge would need to be suspended 1,991 meters (6,532 feet) to allow unobstructed access to the shipping lane. To put this in perspective, the main span of San Francisco's Golden Gate Bridge is 1,280 meters (4,200 feet), about two-thirds the length [sources: Cooper, Golden Gate Bridge].

Turns out, the Japanese government was up for the seemingly impossible task. After three decades of planning, followed by 10 years of work by a 2 million-member construction crew, the Akashi Kaikyo Bridge opened in 1998 [sources: Cooper, Ryan]. Its existence is homage to human ingenuity.

The Akashi Kaikyo Bridge, also known as the Pearl Bridge, holds three world records. Its essential span makes it the longest suspension bridge in the world. With two towers standing 80 stories each, it is the tallest suspension bridge on record. And, because it cost 500 billion yen (approximately U.S. $3.6 billion at the time), it was the most expensive suspension bridge built [source: National Geographic].

Ready for a Suspenseful Ride?

Hankering for one of the most breathtaking views in the world witnessed from the seat of a car? Head to China, where the world's longest suspension bridge connecting two tunnels will take you right over the Dhang Canyon. The bridge, which opened in March 2012, spans 1,175 meters (3,858 feet) and connects the Chongqing Municipality with Changsha city [source: Huffington Post].

Inventing on the Fly: A New Method of Bridge Building

Why did it take 40 years to finish Japan's Akashi Kaikyo Bridge? The answer is surprisingly simple, yet astounding. Some of the bridge's materials and construction techniques had to be invented along the way. And it all began with the first phase of construction -- the bridge's support columns.

Placing preformed concrete towers (the traditional method) in the deep, fast-moving waters of the Akashi Strait was out of the question. Instead, engineers had to come up with a way to build the towers on site. Giant, double-walled steel cylinders were constructed and towed into the strait. While an army of tugboats held the cylinders in position (not an easy task, given the racing currents), massive built-in water spigots were intermittently activated to fill the cylinders' walls. Over the course of eight hours, the cylinders slowly sank onto foundations that had been leveled on the sea floor, hitting their intended targets within a pencil's width of center.

Unfortunately, this was only a temporary solution. The cylinders required concrete innards to stay in place, but ordinary concrete would dissolve when poured into seawater. Japanese engineers were forced to invent a new type of concrete, one that was thick enough to spread under its own weight without washing away in the seawater, yet could be pumped into the sunken cylinders and then harden despite watery conditions.

Then came the next obstacle ... and the next. Even though they'd just come up with an entirely new form of concrete, it wouldn't work for the bridge's support towers. Instead, engineers needed a material that would sway -- not snap -- when the ground shook. This earthquake-proof material, expected to withstand episodes with a magnitude of more than 8, was a special steel alloy. Block by block, the towers were forged and assembled like titan Erector sets until they each rivaled the height of the Eiffel Tower [source: Ryan].

The towers would soon be tested. On Jan. 17, 1995, an 8.5-magnitude earthquake originated just kilometers from the bridge. While the bridge didn't sustain major damage, its supports did shift away from each other. This resulted in the bridge becoming a couple of meters longer than originally planned [source: National Geographic].

The Akashi Kaikyo Bridge in Japan is currently the world's longest suspension bridge. But not for much longer. In 2017, the Strait of Messina suspension bridge connecting Italy to the island of Sicily is expected to open -- and take the world's top spot. The suspension bridge will include 12 lanes for motor traffic, as well as two railway lines, and span more than 4.82 kilometers (3 miles) [source: Adnkronos, Brown]. 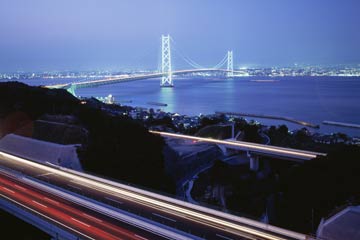 The motorway leading to the Akashi Kaikyo Bridge. The bridge transformed a 45-minute ferry ride into a four-minute car trip.
© pasmal/amanaimages/Corbis

Six years into the construction process, and in 1995 the Akashi Kaikyo Bridge had survived its first earthquake. Surely, the going would get easier, right?

Wrong. The bridge's support cables became the next point of contention. Because the longest suspended portion of the bridge measured more than a mile, ordinary steel cables were just too heavy. Instead, Japanese engineers had to invent a solution: a new type of steel wire that was flexible, incredibly strong and composed of a new blend of alloys and silicone. At just 5 millimeters (1/5 inch) thick, a single strand of this ingenious steel could support the weight of three rhinoceri. Thousands of these strands were compacted into a single cord of steel wire more than 300,000 kilometers (190,000 miles) long and installed by helicopter to hold up the Akashi Kaikyo's roadways [source: Curiosity Aroused].

To lift the 290 sections of roadway deck into place, cranes were built just for this project. The deck's trusses included a strategic triangular design to allow airflow, but also incorporated vertical arms to act as rudders, stabilizing the deck during high winds [source: National Geographic].

Finally, in 1998, 10 years after construction began on the Akashi Kaikyo Bridge, the final piece of deck was in place. The six-lane suspension bridge, which transformed a 45-minute ferry ride into a four-minute journey by car, was complete. But not finished.

Although designed to last 200 years, the Akashi Kaikyo Bridge requires daily maintenance. The Honshu-Shikoku Bridge Authority, charged with the bridge's upkeep, operates a control center that monitors everything from the bridge's horizontal and vertical movement to the air conditioning system designed to keep its steel trusses from corroding. Travelers pay a toll of 2,300 yen (about U.S.$25) to cross the bridge by car [source: Honshu-Shikoku Bridge Authority].

Japanese engineers may have designed and built a suspension bridge that holds world records in triplicate, but they won't be able to rest on their laurels. Emerging technology, including lightweight carbon-fiber cables, could someday make it possible to construct suspension bridges with a reach 10 times that of the Akashi Kaikyo [sources: Curiosity Aroused, National Geographic, Ryan].

One of my dreams is to visit Japan. My parents have traveled to Japan, my aunt and uncle made their home in Tokyo, and my husband spent the first two years of his life there. And now I can add one more line item to my travel goals: traversing the Akashi Kaikyo Bridge. While the reason the bridge came into being is a sad one, it's impressive to discovery the ingenuity that went into building it. It's one thing to build the first suspension bridge of that length. It's another to invent the materials and techniques to make it possible.