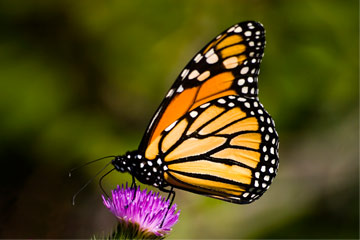 A monarch touches down in the ecosystem of this purple thistle flower. See more insect pictures.
iStockphoto/Thinkstock

Karen walked into the house holding an orange and black butterfly in her cupped hand. I immediately knew what those Halloween colors meant — the monarchs had arrived.

"Wow," I said in bug-eyed amazement. "I've been here 14 years, and never have I seen a monarch butterfly. That's pretty cool."

Indeed it was. Once upon a time, butterflies of any sort were rare on my two Connecticut acres (0.8 hectares). They'd flutter over only a small portion of the property lapping up the nectar from my blooming black-eyed Susans, echinacea, roses, hydrangeas, tulips and foxglove. They stayed away from the rest of the property — a tangle of dead trees, poison ivy, underground wasp nests, and thorny brambles and vines.

By the spring of 2012, I had enough. I bulldozed the dead trees, excavated the rocks and planted a lawn framed by a field of wildflowers. Whaddya know? I inadvertently turned my property into a bustling ecosystem. An army of monarchs and birds soon found a home among the new flowers and grasses. Field mice and moles scurried as never before. Heck, I even saw a snake slither pass.

Of course, not all the critters were welcomed, as is the case of all ecosystems. Much to my dismay, a family of deer sneaked over the fence to nibble on the flowers. Dive-bombing horseflies irritated my dogs at dusk.

Still, I watched in awe as the bees and butterflies skipped from flower to flower while cardinals, buntings, finches and other birds feasted on seeds and feed. I knew the snake and the family of hawks that nested nearby were chowing down on the field mice. Even our barn cat, Blackie, got in on the act. He bagged a mole and left it on the front porch. It seems the chipmunks were too fast.

I was extremely proud of my accidental biosphere. It helped me understand that biodiversity (or how much biological difference you can pack into a particular spot) is important no matter the size of an ecosystem. The monarchs came because they loved the flowers. The bees danced because they had a new source of food. The grass and the new rock garden provided shade, safety and a breeding ground for myriad insects and small animals. Can biodiversity help an ecosystem? You bet. Go the next page to find out how.

Putting the Bio in Diversity

Earth teems with life. Plants, animals and microbes thrive in the mountains, in the oceans, even in the hot springs of Yosemite National Park. We can see some species, such as Yosemite's extremophiles, only with a microscope. Others are as big as a whale or as tall as a redwood. Without such variety, the planet would cease to exist.

Why is that? Earth is a large ecosystem, a community of living, breathing, reproducing organisms in a particular environment. The term also covers the nonliving components within a specific ecological unit, like soil, water and light. Of course, smaller ecosystems exist, such as the one in my backyard or on the city streets of Paris. Every organism within an ecosystem has a specific function, and all work as a team to keep Earth's ecology balanced [source: National Wildlife Federation].

Without all of these different habitats, species and vast gene pools, our very existence would be in jeopardy. Biodiversity provides us with different types of food and materials. Biodiversity generates income for families, businesses and governments. Without bees and other pollinators, there would be no citrus trees, no flowers, no fruits and no vegetables. Where would fishermen find their catch [sources: National Wildlife Federation, Natural History Museum]? Most of our synthetic drugs come from various plants. Cures for a variety of diseases can disappear when a native plant dies.

Moreover, a well-functioning ecosystem cleanses our air and water. It helps the planet weather extreme floods and violent forest fires. A healthy ecosystem absorbs dangerous chemicals and sustains life. Rain forests, for example, contain half of the world's plant and animal species and play a major role in regulating Earth's weather patterns. They act as a firewall against erosion and drought. The rain forests are also the world's lungs, inhaling carbon dioxide and exhaling oxygen. Biodiversity also regulates the chemistry of our atmosphere and soil while determining the growth cycle of plants and mating seasons of animals [sources: National Wildlife Federation, Natural History Museum].

Yet, removing any one species can upset an ecosystem's delicate equilibrium. When one species goes extinct, it changes the way other species interact with one another. Unfortunately, that's happening every day. Habitat loss, the introduction of alien species, pollution, climate change and overexploitation of Earth's natural resources are the main reasons why the planet is losing much of its biodiversity [source: Natural History Museum].

Scientists say there are between 3 and 30 million species of plants and animals on the planet, although some researchers suggest that number might be as large as 100 million [source: National Wildlife Federation]. 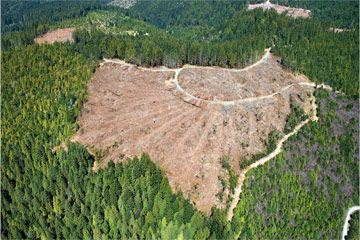 Practices like clear-cutting have helped to drastically amp up the extinction rate.
Comstock/Thinkstock

Animal and plant species die off all the time. It's how the biological world rolls. However, things have changed dramatically in recent decades. According to some scientists, Earth is currently in the midst of its sixth mass extinction. The last major extinction occurred some 65 million years ago, when a large asteroid slammed off the coast of Mexico, killing off the dinosaurs and most everything else. Today, scientists say the extinction rate is as much as 1,000 times faster than what should be natural [source: University of Copenhagen].

Who's to blame? Look in the mirror. There are more than 7 billion of us in the world, all competing for limited natural resources. In 40 years, there could be another 2 billion people, each relying on the planet for food, energy, land and water [source: Eng]. Whether we like it or not, Earth can only sustain so many people. The building of new roads, dams, bridges, farms and ranches all destroy habitat. When there's construction, even on a small scale, animals move away or are killed outright.

The loss of biodiversity has gotten so bad that The World Resources Institute says more than 80 percent of the planet's forests have already been destroyed. In West Africa, humans have ruined 90 percent of the coastal rain forests since 1900. The Amazon rain forest, which is spread across nine South American countries, was once bustling with plants and animals, all untouched by civilization. Yet, several decades of clear-cutting and farming have devastated the region [source: National Geographic].

And it's not just clear-cutting that's driving the loss of biodiversity. Land and water pollution is killing off many species. If you drive a gasoline-powered car, turn on a light that uses electricity generated by a coal-burning power plant or burn fuel oil to heat your home, you're contributing to this mass extinction. Overfishing, over-farming and a ton of other human activities are also driving the loss of biodiversity [source: Natural History Museum].

Although it might seem that alleviating the problem is beyond the average person, think again. We can all do something to help stem the tide of biodiversity loss. We can build birdhouses and bat boxes to attract these high-flying animals. We can plant native flowers and trees in our gardens. Bumblebees are dying off at a terrific rate. We can plant flowers that attract them, giving them a place to pollinate and to rest. Governments can enact legislation keeping bio-sensitive areas off limits or putting caps on greenhouse gas emissions, which fuel global warming [source: Midlothian].

As for me, well, I'm planting a meadow of tall grass and more wildflowers behind the house. It's costing me a bundle — I have to take down many damaged and dead trees — but the planet and the monarchs are worth it.

Author's Note: How does biodiversity help an ecosystem?

OK, I know what you're saying. If I'm such a biodiversity nut, why am I always cutting down trees? Let me draw you a picture. Most are dead, and two have fallen on the house, most recently when Superstorm Sandy slammed into New England. I realize that some birds might be displaced when I cut down those trees. But, by replacing the deadwood with grasses and flowers, I'll create a more wonderful ecosystem and I won't have to worry every time a mighty wind blows.