All Creatures, Great and Small 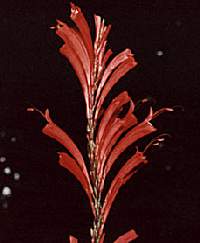 Rainforests are home to the majority of animal species in the world. And a great number of species who now live in other environments, including humans, originally inhabited the rainforests. Researchers estimate that in a large rainforest area, there may be more than 10-million different animal species.

Most of these species have adapted for life in the upper levels of the rainforest, where food is most plentiful. Insects, which can easily climb or fly from tree to tree, make up the largest group (ants are the most abundant animal in the rainforest). Insect species have a highly symbiotic relationship with the plant life in a rainforest. The insects move from plant to plant, enjoying the wealth of food provided there. As they travel, the insects may pick up the plants' seeds, dropping them some distance away. This helps to disperse the population of the plant species over a larger area -- underneath the canopy, the wind is not strong enough to carry seeds a significant distance, so plants depend entirely on animals for seed dispersal. Less-harmful insects may also help a plant by fighting off more destructive insect species.

The numerous birds of the rainforest also play a major part in seed dispersal. When they eat fruit from a plant, the seeds pass through their digestive system. By the time they excrete the seeds, the birds may have flown many miles away from the fruit-bearing tree.

There are also a large number of reptiles and mammals in the rainforest. Many of these species have remarkable adaptations for life in the trees. Some animals have very thin webs of skin that let them glide from branch to branch. Many mammals, including a wide variety of monkeys, have developed prehensile tails. Essentially, the tail works like an extra hand to grasp hold of tree branches. Obviously, this adaptation makes life much easier for animals who spend their lives in the trees. For example, a monkey might grab onto a branch with its tail so it can reach down to grab a piece of fruit that would otherwise be inaccessible.

This Howler monkey can grab ahold of branches with its prehensile tail.
Photo courtesy Todd Fearer

Since the weather is so hot and humid during the day, most rainforest mammals are active only at night, dusk or dawn. The many rainforest bat species are especially well adapted for this lifestyle. Using their sonar, bats navigate easily through the mass of trees in the rainforest, feeding on insects and fruit.

While most rainforest species spend their lives in the trees, there is also a lot of life on the forest floor. Great apes, such as gorillas and orangutans, wild pigs, big cats and even elephants can all be found in rainforests. There are a number of people who live in the rainforests, as well. These indigenous tribes -- which, up until recently, numbered in the thousands -- are being forced out of the rainforests at an alarming rate because of deforestation. In the next section, we'll look at this deforestation process to see how it affects people everywhere.