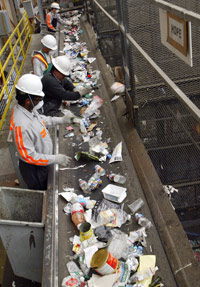 Workers at the Norcal Waste recycling plant sort through materials. The small pieces mixed in will most likely end up as residual.
Justin Sullivan/Getty Images

Since your recyclables will eventually be sold to manufacturers, they must meet certain standards. They can’t have too many impurities, since recycled materials compete with virgin materials for use in manufacturing. So the cleaner the materials you return, the more likely it is they will be recycled.

The Minnesota Recycling Program says this means that a pizza box covered in grease and cheese you toss in your recycling bin will end up in a landfill. So, too, will tiny pieces of broken glass, especially when the pieces are different colors (called mixed-glass cullet). And many recycling programs won't take some products that are very difficult to recycle. Chief among them is PVC. This kind of plastic (which can be identified by the 3 inside the recycling symbol these products bear) contains too many additives to be recycled in most cases, since these additives can affect the purity of a batch of recycled plastic.

The remnants of the materials that can’t be recycled is called residual. The less residual a recycling plant allows, the more money it makes, since residual is simply thrown away at a cost to the recycling outfit.

Because of its unparalleled economic growth, China has become the world’s largest importer of recycled raw materials. Many of the used items you put on your curb make their way to China; in 2004, China imported $3.1 billion worth of the United States’ scrap materials [source: USC]. But not everything that ends up in China can be used.

Because China began buying old printer cartridges in the early 21st century, the cartridges went suddenly from trash to treasure. As a result, stores began accepting used cartridges and consumers began bringing them in.

But the most valuable part of the ink cartridge, it turns out, is the ink. After removing the last little drops from cartridges, the ink can be repackaged and sold. The cartridges are simply discarded, causing landfills in China to fill with empty plastic printer cartridges. What’s worse, an investigation found that in Guiyu, China, dumping or burning of these cartridges resulted in the local drinking supply becoming tainted with 200 times the acceptable levels of acid and 2,400 times the acceptable levels of lead [source: International ITC].

There have been plenty of other cases of recycling fraud that have come to light since the recycling movement began. In New Hampshire in 2002, a man was charged with fraud after his fluorescent light bulb recycling firm was found to lack the capability to actually recycle the bulbs. The firm had charged school districts and agencies in several states to accept their light bulbs for recycling. Fluorescent light bulbs contain mercury -- a toxic substance -- but rather than recycle the bulbs, the company stored them in abandoned buildings around the state [source: EPA].

And in Illinois, a company that specialized in recycling toxic waste was found to have illegally stored plenty of it in abandoned buildings in poor areas of Chicago. What’s more, the company actually marked some toxic waste as harmless and sent it to landfills where it was dumped [source: National Post].

But despite stories like this and criticisms of recycling -- that it may actually be environmentally harmful or that it’s financially unsound -- Americans appear to prefer sending their waste off to recycling plants than to dumps or to the Great Pacific Garbage Patch.

For more information on recycling and other related topics, visit the next page.