The History of Commercial Whaling 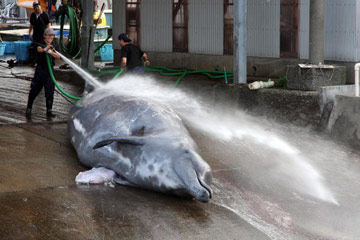 A Baird's beaked whale is prepared for processing at Wado Port in Minamiboso, Chiba, Japan in 2009.
Junko Kimura/Getty Images

The Basques, an ethnic group originating in northwest Spain and southwest France, conducted the first official commercial whaling operation. As early as 1,000 A.D., they hunted northern right whales in the Bay of Biscay region, located along the western coast of France and the northern coast of Spain. Other countries soon followed suit. England started hunting bowhead whales around the North American colonies in 1611, and Japan started whaling in 1675. The Americans began running whaling operations out of Nantucket, Mass., in 1712 [source: Kline].

Early whalers specifically hunted sperm whales because they carried a lot of whale oil. They also couldn't catch whales like the blue, sei and fin whales, because the animals were too big and could out-swim ships.

Norwegian whaling pioneer, Svend Foyn, changed the game when he launched the Spes et Fides, the first steam-powered whaling ship, in 1863. Five years later, Foyn created the harpoon cannon. Both innovations allowed whalers to go after the bigger kills. Indigenous people killed whales by throwing harpoons at them; Foyn turned the kills up a notch with his harpoon cannon, which was basically a gun that fired a heavy harpoon rigged with explosives that went off inside the whale.

The newer technology allowed more people to get into the whaling business with high-paying jobs. In 1857, 329 whaling vessels in the New Bedford, Mass., fleet employed about 10,000 men, according to the U.S. Department of the Interior's National Park Service.

The hunt didn't come without danger or complications. Hunting whales on cold, treacherous waters cost many men their lives, but the money made the risk worth taking. Whale boats could be destroyed easily by these huge creatures as they thrashed violently around the sea waves after being harpooned. Whalers were also susceptible to falling overboard and drowning, or even contracting dangerous diseases like tuberculosis, yellow fever and malaria while docking at different ports.

Today, whales don't have to be taken back to ports, because they are processed at sea on whaling ships. The harpoon cannon allows the whale to be killed quickly, and if the animal doesn't die right away, the hunters shoot it.

Now let's take a look at the impact this industry has had on the whales themselves.