The Fight to Regulate Commercial Whaling 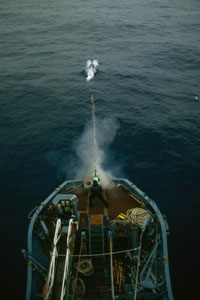 A Japanese crew member shoots a harpoon at a whale in the Antarctic during a scientific research mission.
M. Votier/Hulton Archive/Getty Images

As countries -- even whaling countries -- grew increasingly concerned about the effects of commercial whaling, it was time to take action. The League of Nations put together the Geneva Convention for the Regulation of Whaling. In 1931, 26 countries, including Norway, Great Britain and the United States, signed the convention to prevent whale extinction. The purpose was clear: to make decisions on the whaling industry.

Not everybody was on board. Germany, Japan and Russia refused to sign the agreement. Other countries felt the convention didn't go far enough -- it was like putting a Band-Aid on a gunshot wound. But it was a start.

In 1936, the International Agreement for the Regulation of Whaling was signed in London. This agreement set whaling seasons in the Antarctic and banned whalers from hunting certain endangered species. Once again, Japan refused to abide by this agreement. During the next whaling season, 46,039 whales were killed in the Antarctic -- the highest total ever [source: Kline].

The early agreements weren't working, so the International Convention for the Regulation of Whaling formed the IWC in 1946. This commission was basically tasked with determining the fate of whales. It prevented whalers from hunting gray and right whales, developed quotas for the numbers of whales various countries could kill, and designated areas and times of the year when whalers could hunt. But making rules was a lot easier than enforcing them. Too many whales were still being killed.

In 1982, the IWC voted to ban commercial whaling beginning in 1986. Once again, it was rejected by Japan, Norway and Russia. Russia, however, did eventually get out of the whaling business [source: Clapham and Baker]. Kline, the Oceans Campaigner at Greenpeace USA, calls the commercial moratorium on whaling, "one of the greatest environmental achievements of the 21st century." He says its huge success relies on the fact that there's more international outrage to keep the pressure on Japan, Norway and Iceland. "When people find out what their own country is doing, they don't like it," he added [source: Kline].

Eight years after the moratorium began, the IWC established the Southern Ocean Whale Sanctuary -- the water that surrounds Antarctica -- where whales cannot be killed. However, that hasn't stopped Iceland, Japan and Norway from hunting whales there. Many accuse Japan of circumventing the rule by hunting whales inside the sanctuary under the guise of scientific research -- a provision allowed by the IWC -- and culture.

Norway and Iceland refuse to abide by the moratorium. Activists argue that too many whales are still dying. In fact, the World Wildlife Federation estimates that more than 31,000 whales have been killed since the IWC banned commercial whaling 24 years ago. The next page shows us that the fight to stop whaling continues even today.