The Depletion of Whale Populations 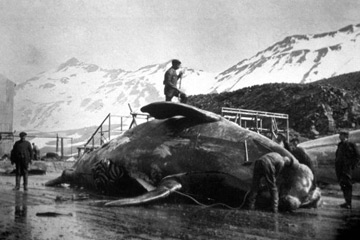 Workers begin to dissect the carcass of a whale caught in Antarctica in 1935.
Hulton Archive/Getty Images

The beginning of the 20th century marked the beginning of rapidly reduced numbers of whales. Whalers seemed to believe that the ocean was filled with limitless supplies of different species. In 1904, Carl Anton Larsen, of Norway, started the first Antarctic whaling operation in the South Atlantic island of South Georgia. It didn't take long for the numbers of whales killed to increase:

When the whale population dropped in a particular area, whalers moved to other regions in search of more species. The dwindling numbers of North Pacific right whales and North Pacific gray whales, as well as bowheads and northern right whales in the North Atlantic, forced whalers to travel to find more. They searched for whales in the North Atlantic Polar Region, the Caribbean, the Southern Ocean and the South Pacific [source: Kline]. But the vast majority of whaling took place in the Antarctic.

In 1925, the British built the first whaling "factory ships." Men could process whales right there on the ships and live on the water for months at a time. These new ships also provided whalers great cover. Since they were in open water and not in a specific country, they didn't have to abide by any rules prohibiting them from catching certain sizes or species of whales.

The possibility of extinction forced countries to take notice. Too many whales were dying, and people were getting worried. Sixty years after the first factory ships were introduced, more than 2 million whales had been killed in the Southern Hemisphere [source: Clapham and Baker]. All nations agreed that something needed to be done before an entire population of whales was wiped out. Let's take a look at how countries pulled together to address this issue.