The Future of Whaling 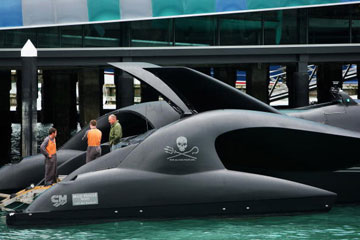 As long as there are still whaling ships in the open waters, there will be groups out there attempting to stop them. Anti-whaling activists and organizations don't like the fact that Iceland, Japan and Norway still continue to hunt the sea creatures. The Japanese don't want to be told what to do about a tradition they say is deeply rooted in culture and tradition. Japanese Prime Minister Yasuo Fukuda of the House of Councilors insists that his country is not violating any rule under the International Convention for the Regulation of Whaling [source: McDonald].

Non-whaling countries disagree, and at times, the fight gets heated. Every winter, the Sea Shepherd Conservation Society endures freezing temperatures and roaring waves as they head out to the Southern Ocean Whale Sanctuary to confront Japanese ships. In January 2010, a Sea Shepherd boat and a Japanese whaler collided into one another. The Sea Shepherd crew accused the Japanese of intentionally running their boat, the Shonan Maru No. 2, into the Sea Shepherd's boat, the Ady Gil. The aftershock of the collision didn't stop after the Ady Gil sunk. Sea Shepherd crewman and anti-whaling activist, Pete Bethune, boarded the Shonan Maru No. 2 and threatened to make a citizen's arrest. He was eventually arrested in Tokyo, given a suspended sentence and released and banned from the country [source: McDonald].

Not everyone in Japan wants to continue the country's tradition. Even pro-whalers in Japan concede there is a challenge convincing the younger generation to support whaling: This generation does not view whales as a food source, but as creatures that need to be protected [source: Faiola]. They share the sentiment of the anti-whaling countries of the IWC.

IWC members met in Agadir, Morocco, in June 2010 to discuss the fate of the commercial ban. The three whaling countries wanted to lift the ban on commercial whaling. In return, they would have agreed to reduce the numbers of whales they kill. However, the majority of the IWC nations wouldn't go along with a proposal allowing commercial whaling to be legalized again. So commercial whaling is still forbidden -- for now.

The issue is far from settled. As long as whaling nations are allowed to hunt whales, they will continue the practice. But nipping at their heels are the anti-whalers who vow to continue to fight to ensure that whales will never again be hunted and killed for man's financial gain. For more information on whales and other water mammals, follow the links below.