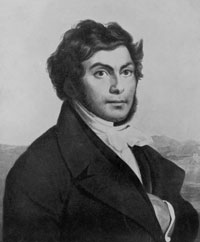 The earliest attempt at translating hieroglyphics came well before the discovery of the Rosetta Stone. A fifth-century scholar named Horapollo set up a translation system based on hieroglyphics' relation to Egyptian allegories. After Horapollo's hypothesis, 15 centuries of scholars dedicated themselves to a false translation system. De Sacy, who had translated the Demotic portion, tried his hand at the hieroglyphic inscription, but he failed, too.

Thomas Young made a significant breakthrough in 1814 when he discovered the meaning of a cartouche [source: BBC]. A cartouche is an oval-shaped loop that encloses a series of hieroglyphic characters. Young realized that these cartouches were only drawn around proper names.

Identifying the name of the pharaoh Ptolemy, Young was able to make some progress with his translation. Reasoning that a name sounds similar across languages, Young parsed out a few sounds in the hieroglyphic alphabet using Ptolemy's name and the name of his queen, Berenika, as guides. But because Young was counting on Horapollo's premise that pictures corresponded to symbols, he couldn't quite make sense of how phonetics fit in. Young gave up the translation but published his preliminary results [source: BBC]. His discovery built the foundation of Jean-François Champollion's successful translation.

Champollion began his linguistic education in 1807 under de Sacy and became familiar with the languages and skills that would aid in his translation of hieroglyphics. After Young's breakthrough in 1814, Champollion picked up where he had left off [source: Ceram]. Champollion reconsidered the connection between the hieroglyphics and phonetics. He thought that the images might have some symbolic meaning, but that they also probably had some connection to phonetic sounds, like most languages do.

In 1822, Champollion got his hands on some very old cartouches. He started with a short cartouche that contained four characters, the last two of which were identical. Champollion identified the last two characters as the letter "s." Examining the first character, a circle, he guessed that it might represent the sun. In Coptic, another ancient language, the word for sun is "ra," and by spelling out the cartouche phonetically as "ra - s s", Champollion could see only one name that fit the bill: Ramses.

This cartouche, which contains the name
HowStuffWorks 2007

Determining the connection between hieroglyphics and Coptic proved that hieroglyphics wasn't based on symbols or allegories: It was a phonetic language -- one that corresponded to sounds. Champollion was so overwhelmed by his discovery that he fainted on the spot [source: Ceram].

Next, we'll learn about the vast world that opened up after hieroglyphics could be read.

When Champollion was a born, a magician prophesied that he would become famous. Even his appearance foretold his connection to Egypt -- his bone structure, yellow corneas and dark skin earned him the nickname "the Egyptian" [source: Ceram].

At a young age, Champollion became fascinated with hieroglyphics and declared that he'd be the first person to translate them. He studied linguistics under Antoine-Isaac Silvestre de Sacy and applied to s­chool in Paris. The admissions board was so impressed with his thesis that he was asked to join the faculty. A devoted academic, Champollion nearly became a recluse. His brother Jean-Jacques supported him, even protesting on his behalf to keep him out of the military. In the end, Champollion served his country better by focusing on hieroglyphics.