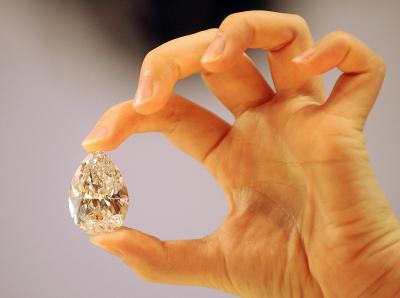 Mike Clarke/AFP/Getty Images
Moissanite is a product that attempts to replicate a diamond.

Diamonds are one of the most beautiful, and most expensive, jewels available today. They are also extremely popular. Diamonds are an important symbol of engagement in many parts of the world, and they also appear in everything from simple earrings t­o the tiaras and crowns worn by royalty!

Because they are so popular and expensive, diamonds have been a favorite area for imitation over the years. Cut glass, rhinestones, and cubic zirconium are all attempts to replicate the beauty of diamonds at a lower cost. None of these are particularly good imitations -- they lack the luster and brilliance of the real thing.

Technology's latest attempt to replicate the diamond is a product called Moissanite. In this edition of How Stuff Works, you will learn about this interesting jewel. We will discuss its history, qualities, creation, and availability!

In 1893, Nobel Prize-winning French scientist Dr. Henri Moissan discovered minute quantities of a new mineral, natural silicon carbide. The mineral was located in an ancient meteorite found in the Diablo Canyon in Arizona. Later named "moissanite" in honor of Dr. Moissan, this mineral's supply was too limited for jewelry use.

The Mohs Scale is used to determine the hardness of solids, especially minerals. It is named after the German mineralogist Friedrich Mohs. As indicated in the chart above, moissanite has a Mohs Hardness rating of 9.25. The scale reads as follows, with the hardness and mineral given from softest to hardest:

If you know much about diamonds, you know that diamonds are graded according to what is commonly known as the "Four Cs." The Four Cs consist of:

Moissanite jewels are inspected by trained graders and are scored on a scale specific to moissanite. All of the jewels sold are of "very good" quality, so unlike some other jewels, you will not find moissanite that is off-color or visibly imperfect. All of the jewels sold are of good color and are "eye clean," meaning you cannot see imperfections with the naked eye. Because its physical properties are different than a diamond, moissanite is not graded in the same manner. Cut and carat weight are fairly similar, but moissanite weighs differently than diamond, so it is not an "apples-to-apples" comparison. The retail cost of moissanite is based upon the cost of the gold and the setting in addition to the cost of the jewel. As a general rule, with all other things being equal, a moissanite retails for about 1/10th the cost of a diamond.

Where to Find Moissanite Jewelry

Only in the last few years has the word about moissanite spread. In 1999, Charles & Colvard launched its first national advertising campaign, including television ads, and print/display ads in Harper's Bazaar, airports, and shopping malls in select markets. Targeted image ads have run in publications including People magazine and Southern Living. The stone has also been shown at regional, national, and international jewelry trade shows. Moissanite is available only at select jewelers and in fine jewelry settings. Authorized jewelers can offer customers the opportunity to create unique, custom moissanite jewelry accompanied by Charles & Colvard's Certificate of Authenticity and Limited Lifetime Warranty. To find an authorized retailer near you, visit the Charles & Colvard Web site or call 1-800-210-4367.