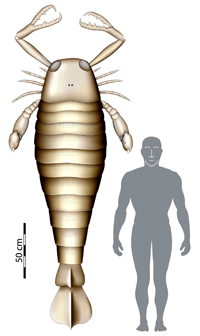 A eurypterid, or giant sea scorpion, would be taller than a man.
Courtesy Simon Powell/University of Bristol

You find yourself sitting at the edge of a lake. It's a beautiful day: The sky is a clearer blue than you've ever seen it. Even the air feels cleaner, easier to breathe. You decid­e to wade into the lake; the cool water feels good against your skin. As you wade deeper, you stub your toe on something that feels like a long rock or log. You find a branch at one end, tapering off into a crescent shape and lined with spikes.

Suddenly the "log" moves, and it becomes painfully clear that the crescent-shaped part is an enormous claw. It grabs your leg, pulling you under, as another claw grabs your torso. You've just encountered a giant sea scorpion, and your chances of surviving are pretty slim.

Fortunately, you would have to travel back about 400 million years to visit during the Devonian period of the Paleozoic Era for this scenario to play out. This period was a time of gigantism among living creatures prowling among earth and sea. There were dragonflies with two-and-a-half foot wingspans and six-foot-long millipedes scampered about. But the species that dominated them all was pterygotid eurypterid -- the giant sea scorpion.

Eurypterids are an extinct family of arthropods believed to be the ancestors of today's scorpions, and possibly all arachnids -- the class that includes spiders and other eight-legged arthropods. During the 27 million years giant sea scorpions lived, they took their place at the top of the food chain, thriving without any natural predators. Giant sea scorpions were some of the fiercest creatures on Earth, devouring large fish -- as well as one another. Eurypterids were cannibals, fighting and eating one another in competition for resources, prey and mates. They evolved into enormous size, but science's conception of just how enormous has recently changed [source: Braddy et al.].

A few years ago, paleontologist Markus Poschmann was digging for fossils in a quarry in Germany. He and his colleagues were removing slabs of siltstone that had been sediment in a lake or lagoon hundreds of millions of years ago. This ancient lake bed was the home of the largest arthropod ever discovered [source: University of Bristol].

Poschmann noticed "a dark patch of organic matter" on one of the slabs of siltstone, and upon further investigation, discovered it was part of a claw belonging to Jaekelopterus rhenaniae, a species of sea scorpion. The claw piece was more than 18 inches (46 centimeters) long, and by calculating the proportion to the rest of the body, it showed that the scorpion it belonged to was more than eight feet long. This is almost a foot and a half longer than anyone estimated the sea scorpion ever grew.

Paleontologists differ in their opinions of how the giant sea scorpions grew to be so large. The atmosphere during the Devonian period featured a higher concentration of oxygen (35 percent, compared to 21 percent today). Some paleontologists believe this accounts for the gigantism that is characteristic of the period.

Others believe that sea scorpions grew to be so big out of necessity. In order to pierce the ever-evolving armor of their fish prey, their claws (and bodies) had to evolve into a gigantic size. The authors of the paper that introduced Poschmann's find discount this explanation and believe that it was a combination of factors -- including the lower gravity found underwater -- which allowed sea scorpions to become gigantic.

Regardless of how they became so large, scientists generally believe that sea scorpions met their match in the form of large fish with strong jaws and teeth. These fish forced most sea scorpions onto land, where they evolved into smaller size, leaving fossils behind as a reminder of the time when they ruled the Earth.

For more information on evolution, arachnids and related topics, visit the next page.