There aren't a lot of geology terms that can make your stomach growl. "Cave popcorn" is the rare exception. It sounds like it could be a trailside snack food — a treat for Cub Scouts on weekend camping trips. But it's actually a rocky deposit related to stalactites and stalagmites. Wherever cave popcorn occurs, it stands as a monument to the transformative power of water, and to the fact that caves are constantly changing.

By one popular definition, a cave is a natural void in the ground, or in a glacier, that's large enough for a person to enter and also contains areas that never see direct sunlight.

Lava is a cave-making architect. If, for example, a stream of this molten rock hardens on the outside before its interior solidifies, you could end up with a tunnel-like cave known as a lava tube. Other caves are created by the relentless hammering of lake or ocean waves. Naturally, you'll tend to find those along coastlines.

Water builds caves by subtler means, as well. Limestone and dolostone are two common types of sedimentary rock that contain the mineral calcite. Exposure to even weakly acidic water can make calcite dissolve. And rainwater that absorbs carbon dioxide (CO2) gas — through contact with the air and dead plant matter — becomes a carbonic acid solution.

Now let's say the bedrock in your home area is a big old chunk of limestone, dolostone or a similar material. Let's also assume that it's full of cracks, holes and crevices made by geologic forces. Once CO2-laden rainwater seeps through the overlying topsoil, it'll enter those fractures. If the bedrock contains a high percentage of calcite, large quantities of that material will get broken down by the acid solution. At the same time, the flowing water is going to cause physical erosion.

Through this process, big subterranean openings are created in the bedrock. Those that develop above the water table (a subsurface level that's permanently saturated by groundwater) may expand into vast caverns or cave systems. Caves produced in this manner are called solution caves.

Acidic water doesn't just create solution caves; it's also prone to decorate them later on. Any natural, decorative cave structure — be it a pointy stalagmite, a dangling stalactite or something else altogether — that forms within a pre-existing cave is called a speleothem.

To learn more, we contacted Lee-Gray Boze, a physical scientist with the United States Geological Survey. In an email, he explains that speleothems "most often occur when water carries dissolved minerals and deposits those minerals on the cave surface."

Remember the CO2-loaded groundwater that we mentioned? As noted earlier, when this liquid passes through a limestone/dolostone bedrock layer, it absorbs calcite from the rock. If the water proceeds downward and enters an open, air-filled cave, something interesting happens.

First, the water loses some of its CO2 gas, which gets released into the air. And that's not the only thing it surrenders. With its CO2 holdings depleted, the liquid unleashes some of the calcite it had absorbed previously. The excess calcite may accumulate on cave floors, walls and ceilings. Sometimes, as more and more calcite (or another mineral) is deposited by water at a specific location, the piled-up building material slowly develops into a speleothem.

By far, the most famous speleothems are the icicle-shaped stalactites and stalagmites. Lesser-known varieties include floor-to-roof columns and draping flowstones. And then there's cave popcorn.

Typically made of calcite, gypsum or aragonite, cave popcorn is named after its distinctive shape. This kind of speleothem consists of tightly clustered nodules measuring anywhere from 0.7 to 3.9 inches (2 to 100 millimeters) in diameter apiece. If you squint your eyes, the bumpy bundles look sort of like ossified movie theater popcorn. Yum.

"Cave popcorn usually occurs in wet areas of the cave where water can flow on the [cave] surface," Boze says. "Many of the longest cave systems tend to be drier, with some notable exceptions, and these dry areas tend to be less decorated. However, in the wet areas, cave popcorn is a common feature, usually indicating a wet environment and air flow."

Boze says many different geologic mechanisms can create cave popcorn. "It is most commonly formed when water fills the pores of a rock, and air flows over it," he explains. "Other common environments can include dripping water, in which the drips may cause popcorn to form in a radius around the drip sites." It's even been known to form underwater, at the bottoms of cave floor pools.

And the popcorn doesn't always emerge in isolation. It often develops on or around other kinds of speleothems. For example, "Billy Clubs" are stalactites that've been coated in cave popcorn. Examples of these may be found in South Dakota's Black Hills region — where, according to Boze, the caves tend to be big, wet and somewhat breezy. "Together these factors form really good conditions for popcorn to occur," he says.

NOW THAT'S INTERESTING
There's a rhino-shaped cave in Blue Lake, Washington. Around 15 million years ago, a prehistoric rhinoceros relative named Diceratherium was encased in a layer of basalt after a volcano in the Pacific Northwest erupted. The creature's body disintegrated (apart from some leftover bone fragments) and the surrounding rock hardened. This created a geologic cavity that looks like a perfect Diceratherium mold. You can enter it through an opening located where the beast's hindquarters used to be.

What's the Difference Between Agnosticism and Atheism? 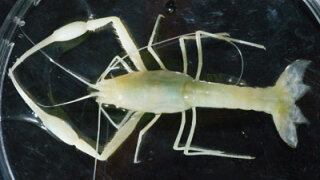 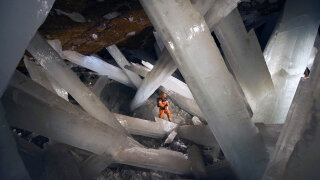