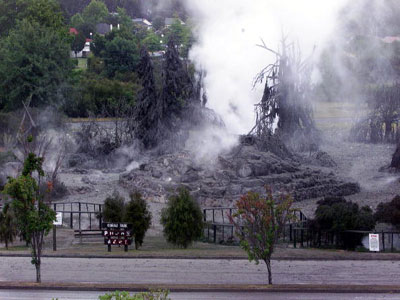 People should be careful around geysers. In 2001, an erupting geyser in Kuirau Park, New Zealand, damaged trees in the area and splattered the park with mud.
Phil Walter/Getty Images

Now that we've taken a comprehensive look at how geysers work, we're ready to look at man's past and present interaction with them.

Considering the spectacle of a geyser eruption, it's no surprise that tourism is the most common way that people interact with geysers. Tourism serves to educate the public both on how geysers work and on what it takes to protect these natural resources. Parks often take great care to control how tourists interact with geysers, in part because tourists can harm geysers with their trash and debris, but also because geysers are quite capable of harming tourists as well: In 1903, four tourists visiting New Zealand got caught in a geyser jet in Waimangu Valley. The eruption killed all four people and carried them more than a mile (1.6 kilometers) away from its source [source: Geyser Grazing Society]. While such incidents are rare, we should always remain conscious of the amazing forces behind geysers.

Geysers serve as more than tourist attractions, however. The same geothermal energy that drives geyser activity can also be used to generate power for houses and businesses. While geothermal energy can provide a clean source of electricity, tapping into that source can sometimes create major consequences for geothermal features in the area by draining the geyser fields of their water or energy.

People have also been known to intentionally destroy geysers through vandalism, throwing trash and debris into a geyser's opening and blocking its plumbing system. It's somewhat ironic, then, that man has also gone to great lengths to create "artificial" geysers by digging wells that tap into a geothermal heat source. While that type of geyser has a man-made plumbing system, its eruptions are driven by the same forces that power its natural counterparts. People have also put a lot of energy into repairing natural geysers, as in the case of Iceland's Strokkur Geyser.

As we understand more about how fragile geysers are, we'll see more measures put in place to protect these natural wonders. If you're interested in learning more about geysers, take a look at the links on the following page.